Posted by Margaux Camaya, The Visual Traveler August 13, 2017
For the past few months, I've written blog posts about my unexpected discoveries in some of Cebu's hotels.

There were the Jose Rizal drawings, the Miss Universe 1974 winners, and that huge world map on a lobby ceiling. I had to stop after these posts since I was still on a search for enthralling details about other Cebu Hotels. And it's such a coincidence that I found my new inspiration in Quest Hotel and Conference Center Cebu.


Yesterday was just my second time attending an event in one of Quest Hotel's Meeting Rooms and on my way to the designated room, I got lost. Instead of going to the 6th floor, I ended up on the 7th. As I was reading the sign where specific meeting rooms were located; I saw a pattern. 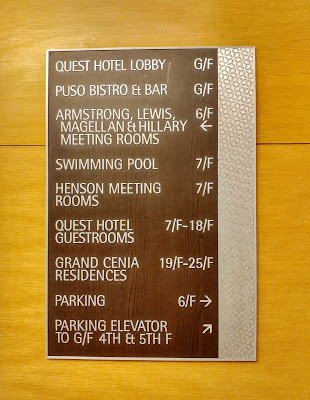 Hillary, Magellan, Armstrong, Lewis, and Henson --- I repeated the names several times in my mind; Then I had a lightbulb moment.

From the North Pole to the Seas to the summit of the highest peak to the vast territory of a continent and finally, to the moon. They were all explorers and adventurers, who opened the unknown to mankind.

I liked that there is a description of each of the Meeting Room's nameplate. It explains who the room is named after. I haven't seen any other hotel that is doing this practice except for Quest.

I wonder how many guests or visitors actually bothered to read that extra tidbit whenever they enter any of these meeting rooms or even if someone has spotted the significance of the names.

When I realized what I found, I felt like Russell the Explorer (you know, that little guy from the Pixar movie UP!) when Carl gave him his prized grape soda cap.

Here are the 5 personalities that Quest Hotel paid homage to.

He sailed across the Atlantic Ocean, discovered the Strait of Magellan which led him to the Pacific Ocean. In 1521, he reached the Cebu and Mactan Islands where he would die in Battle. 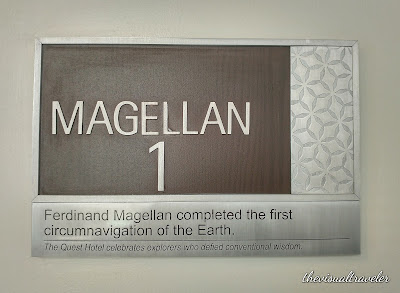 In 1804, Thomas Jefferson tasked Meriweather Lewis and William Clark to journey across the recent Louisana Purchase to survey the flora, fauna, and people of the new territory. The Lewis and Clark expedition traversed the Pacific Northwest, Oregon Country, and the Missouri River.

It took the Corps of Discovery, which was led by Lewis,  two years to complete the task.

After the expedition, Meriweather Lewis was also appointed Governor of the Louisiana Territory. 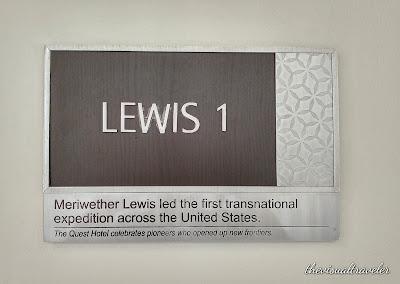 In 1909, Matthew Henson was the first African-American explorer to reach the Geographic North Pole. He was Robert E. Peary's most trusted travel companion and joined him for six voyages. He learned the Inuit language and wrote his own account of his North Pole adventure. 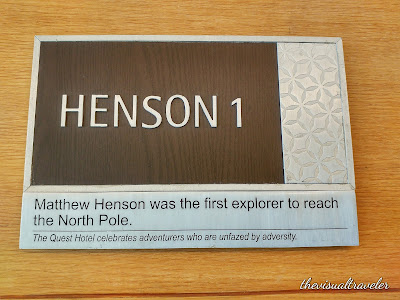 On May 29, 1953, Hillary together with his Sherpa guide, Tenzing Norgay was the first mountaineer to successfully reach the summit of Mt. Everest. News of his achievement came days before the coronation of Queen Elizabeth and it added to the celebration.

Sir Edmund Hillary is also known for his travels to the North and South Poles. 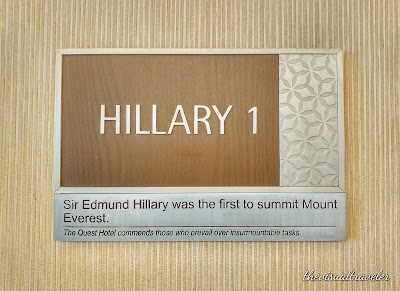 As part of Apollo 11, astronauts Neil Armstrong, Buzz Aldrin, and Michael Collins landed on the moon in July 1969. Armstrong was the first human to ever set foot on the lunar surface.

This historic moment was immortalized by his message which was transmitted to Earth, "One small step for man. One giant leap for mankind."

Our very own Gloria Diaz who was crowned Miss Universe 1969 in Miami, had an opportunity to talk to the Apollo 11 astronauts while they were still in Space. 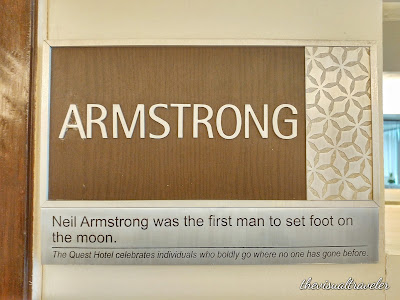 Quest Hotel and Conference Center makes their own Taho and offers it during their Breakfast Buffet. They also serve one of the best Native chocolate (Tsokolate) hot drinks in Cebu which is available during Breakfast and Merienda.
Quest Hotel and Conference Center is situated near the Cebu Business Park District. The hotel is conveniently located near Ayala Center Cebu.

Read more about the secrets of other Cebuano Hotels: