Food Stories: From My Family to Yours

Posted by Margaux Camaya, The Visual Traveler May 25, 2019 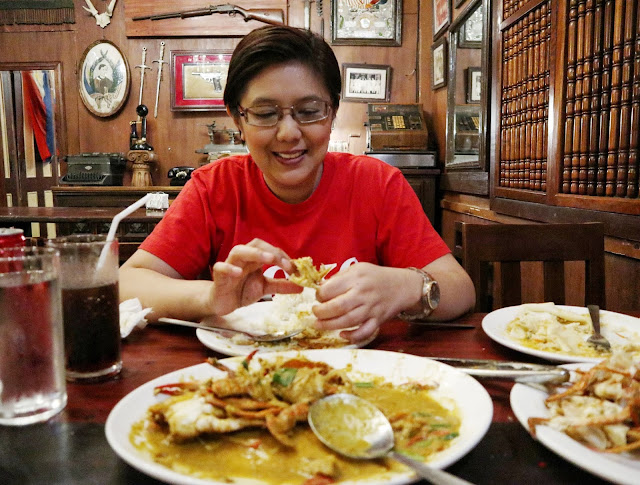 Every Filipino family has its own set of treasured food stories that are passed on from one generation to another.

Every morsel, every bite, every ingredient added to a family dish tells a story of love, history, and culture.

I'm the product of a gentleman from Pampanga and a lass from Albay. Two provinces that are known for their amazing culinary delights. But when it comes to the kitchen, these two forces often than not clash in their cooking techniques.

My designated role when I go home to Manila is to cook our family meals. But since my dad's second retirement, he has been spending more time in the kitchen.

During my Holiday visit, I was helping out my parents prepare our seafood lunch consisting of salmon and blue marlin steaks paired with ginataang alimasag with nangka (blue crabs in coconut cream and unripened jackfruit). Earlier that morning, my dad went to Farmer's Market in Cubao to buy the fresh ingredients needed for our dishes. It has always been our go-to wet and dry market.

While I was prepping the steaks, I heard my parents arguing on how to stir the coconut milk. You have to continuously stir it to avoid too much oil from bubbling out. One parent wanted to do it by stirring clockwise, the other one wants to wait and stir when the coconut milk starts boiling.

I couldn't help but laugh when I heard them arguing. My mom is from Albay and my dad is from Pampanga. Both hailing from provinces that take pride in their cooking. At first, nobody wanted to budge but eventually, my dad graciously let my mom have her way.

Same thing happens when either parent is cooking adobo (whether pork or chicken); my dad's dish tends to have a darker sauce (because of the soy sauce) while my mom prefers the fried version with more vinegar in the marinade.

My Pampango grandfather was hired as a cook by the American Liberation forces during the latter years of World War II. It was at that time that he learned how to prepare American-style pot roast, mashed potatoes, tuna-egg salad, and corned beef hash. He went on to work at the prestigious Manila Hotel until his retirement in the early 1970s.

I remember that whenever we visited them during holidays, my grandfather would cook these staple dishes. Being one of the younger grandchildren, one thing that I regret was not grasping the importance of knowing his recipes. Among his specialties, the only dish I became proficient with, was his version of the corned beef hash.

Because of his American kitchen training, he loved Hormel corned beef for his hash. First, you have to fry the potatoes which are sliced into cubes. Once done, set them aside and then stir fry the onions, garlic, and tomatoes. You mix in the corned beef and the potatoes. If you want your hash to have some sauce, you add water.

My dad's cooking story is different. He was the seventh child out of eighth and he spent a lot more time with my grandmother during his childhood. He gained his skills in the kitchen through his mother. Her style was distinctly more Filipino compared to my grandfather's.

One of my dad's kitchen duties growing up was to cook the rice for their breakfast. We learned how to cook rice the old-fashioned way from him using a caldero and not in a rice cooker. It's easier to add water than to remove the excess.

It is quite a treat to watch my dad make his special chicken arroz caldo. There was even a time that he used some leftover turkey for his arroz caldo recipe.

He would quietly and masterfully go through cooking this dish without missing a beat. Arroz caldo is a simple and uncomplicated meal but it invokes a sense of comfort because of how it was cooked and who made it.

Last week, I tried my hand in re-creating my dad's arroz caldo. It came out decent and flavorful but still a poor second compared to his. Another dish of my dad's that I re-created in my own kitchen is his adobong pusit. The theme of Sunday lunch at my parents' house is Seafood and Dad would prepare this dish which is always the first to be consumed enthusiastically by everyone. Perfect pairing for adobong pusit is fried fish.

I also learned from my dad how to be efficient and clean while working in the kitchen. You have to multi-task to avoid having heaps of unwashed dishes, pots, pans and utensils lurking in one corner of the kitchen.

My mom used to tell us that she learned how to cook out of necessity. When my parents got married, she only had basic cooking skills. She had to force herself to learn how to cook. She always tells us that if she has a choice, she'd rather clean the house than spend hours in the kitchen.

Decades later, the majority of my favorite comfort foods are prepared and cooked by my mom: Ginataang taguktok na tilapia which she makes every time I visit Manila. Her beef caldereta is a staple at family gatherings and celebrations. Mom's fried pork adobo is the Bicolano version which uses more vinegar. Of course, being Bicolana, she also cooks pork binagoongan which is full of lada or siling labuyo.

One of our all-time favorites is the special leche flan (from a recipe that has been in the family for generations). She uses a round llanera mold compared to the usual oval-shaped ones. Nowadays, when she makes her leche flan, she calls on my nephews to help her count the egg yolks needed for the recipe. In Cebu, the leche flan from Ipar's and MexiMama closely resembles my mom's in taste and texture.

My mom's signature dish (a variation of the Korean fried chicken) was christened Chicken ala Tesca by her nieces. Funny how she'd been making this dish for more than 25 years now,  way before the Korean food invasion of the 2000s.


Mom reminded me never to divulge the recipe of Chicken ala Tesca to others especially the secret ingredient that she uses. My brothers and I all know how to make her special fried chicken and it's always a party favorite whenever it's on the menu.

The sweet, the sour, and the tangy

Last December, I bought Chef Gene Gonzalez's book, Cocina Sulipeña, and there was a passage about the town of Sulipan, Pampanga which was known for its culinary prowess. The wealthy Arnedo clan was famous for entertaining Asian and Russian royalties, American politicians and controversial Filipinos (e.g. Jose Rizal). 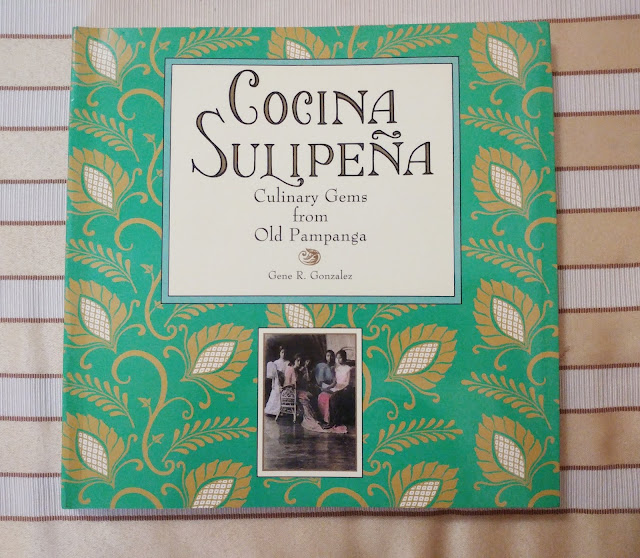 The main plantation product of the Arnedos was sugarcane. A childhood memory of mine popped up while reading the book. I remember visiting my grandparents in Apalit (part of which comprises the now gone Sulipan) during the summer months and we would chew on freshly cut sugarcane bought from the neighborhood store. The price of which would depend on the size of the sugarcane.

The elders told us that it was healthy for the teeth and gums since the constant chewing exercises the mouth and the texture of the sugarcane pulp gently scrapes off leftover food particles on the surface of your teeth. What I enjoyed the most aside from the sweetness was the spitting of the pulp after it has lost its taste. Ahhhh, the simple joys of growing up in the 1980s.

The last time I had a similar experience with sugarcane was when we were traveling in Bacolod about 10 or 11 years ago. We were passing through a sugar plantation on our way to Mambukal Resort and there were newly-harvested ones on the road, I asked the driver to stop and ask if we could buy some. The amused farmers gave us several sugarcanes. They even helped us in peeling off the skin using their bolos. I noticed that their sugarcane was somewhat skinnier compared to the ones in Pampanga.

In one of my trips to the supermarket, I was pleasantly surprised to find ripe guyabano. I bought half of a medium-sized one and ate it gleefully when I got home. Funny how when I was younger I didn't like eating guyabano but now I always look for it when I'm in a supermarket.

A guyabano's texture is similar to atis but without the seeds. It has a silky and juicy consistency that makes the guyabano a sexy fruit, in my opinion.

This is one fruit where I get teary-eyed not because of the taste, it's not known as soursop for nothing, it's more of the memory that it invokes. My maternal grandmother, Mama Flor, loves guyabano so much. When she was still alive, she would annually spend a few weeks during the Summer with us. My mom would stock-up on tetrapaks of guyabano juice and if it was in season, she would also get the fruit itself.

I can't recall how or when I started liking guyabano. I still prefer eating the fruit thou compared to having it as a drink. Maybe I inherited my grandma's love for the guyabano when she passed away.

One of my godmothers, Ninang Azon, was an amazing baker. She was ahead of her time. She started selling her baked goodies in the 1970s and 1980s from her home.

Because of her, I grew accustomed to the taste of Tiramisu (with the rich flavor of brandy), Sans Rival (several layers high), and moist butter cake.

My ultimate best-loved kitchen memory of my Ninang is her Pili Marzipan. Whenever I spend my summer vacation in her house, I would see her make these marzipan bars. The whole house would smell of pili during these times.

It's a labor-intensive creation that would take days to create. You have to first shuck the pili nuts, then crush them using a grinder so that they'll soften and you can easily extract the natural oil. Cook them stovetop, stirring constantly to avoid burning the bottom. You then add vanilla essence, sugar and lemon juice. You have to gently mold them into bars while hot and then place them on racks to cool them down.

Now, you can buy commercially made pili marzipan bars but the quality is way different from the heavenly creation of my Ninang Azon.

I greatly value all of these food memories that I have and had with each family member. I'm now slowly gathering recipes for my collection in preparation to pass them on to other family members.

Anonymous said…
Thanks for sharing your info. I truly appreciate your efforts and I will be
waiting for your further post thank you once again.
July 7, 2019 at 7:39 AM