I never learned how to draw, I can't do straight lines and my color combination is atrocious. I never had the inclination to pick up a pencil nor a paintbrush. If someone asks me to depict people, I can only scrawl out stick figures.

But I do appreciate art and the creative souls who make them. When I was browsing through my Facebook feed today, I was pleasantly surprised with what I saw from one of my friend's posts: a Starbucks coffee cup filled with drawings from Antoine De Saint-Exupery's inspirational book, Le Petit Prince or The Little Prince. Obviously, the book is a favorite of hers as she lovingly paid homage to the French author via her work.

Anyone who has stepped inside a Starbucks store or have ordered from them knows that their hot beverages are served in their iconic white cup.

For artists like my friend, Heidi Pascual-Aquende, she sees the white spaces on a cup as a blank canvass. She started her 'instant cup doodles' while studying in her favorite Starbucks store. She's currently enrolled in a Masters Program and told me that her doodles help her relieve some of the stress of being a student once again.

Paper cup art is nothing new. Countless coffee lovers have been idling their time scratching or scribbling on their cups. It must be the Starbucks siren who acts as a muse to these artistically-inclined people or it could be the caffeine.

Heidi besides being an artist and a book lover is also a mom of two adorable daughters. She's a business owner, a professional photographer and writer, a wife to a fellow artist, and a former member of Ang Bandang Shirley. With all of these different hats that's she's wearing, I can certainly understand how her art is a form of centering herself.

Her 'temporary art', as she calls her works, is her way of practicing the impermanence of things. After filling her cup with her drawings, she would leave them and hope that whoever finds them be pleasantly surprised.

When someone asks to have one of her artworks, she would decline. She says that it defeats the purpose of having someone accidentally discovering it and gleaning a little happiness from finding it.

The ones she created in a Baguio City branch of Starbucks were kept by the baristas in their workplace. On her subsequent visits to the store, they clamored for more. Her most recent illustration spotlights The Venetian Macau.

This reminds me of how neo-expressionist New York artist, Jean Michel Basquiat, would also leave his artworks in and around New York City when he was starting in the art scene. His works of art are now worth millions. Recently, Uniqlo came out with their own collection of graphic tees that featured Basquiat's art.

I asked Heidi what she uses to create her sketches. At first, she borrowed a Pentel pen from the baristas and then on her next cup, she used a Sharpie. On her recent creation, the Le Petit Prince cup, she used a koi coloring brush.

Maybe in the future, I will be lucky enough to come across with one of her instant cup doodles in a Starbucks store. I will surely treasure it.

Art truly is all about life.

Here's a gallery of Heidi's works: 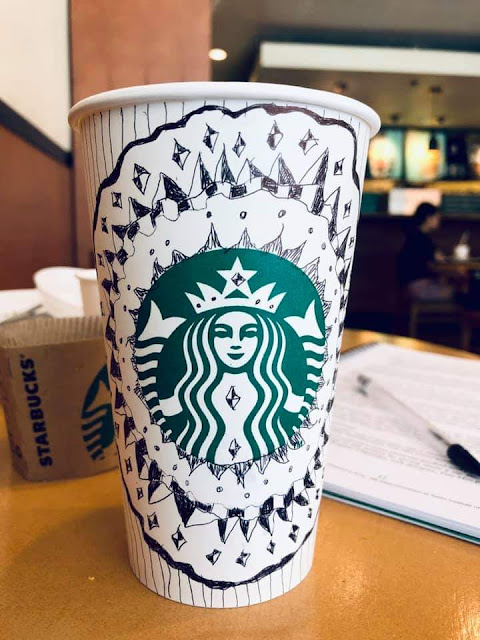 All photos and art works are owned by Heidi Pascual-Aquende. We were given permission to publish them.

Anonymous said…
Pretty! This was an incredibly wonderful post. Thank you
for supplying this information.
July 10, 2019 at 2:39 AM