Posted by Margaux Camaya, The Visual Traveler January 19, 2016
Who can forget Ron Weasley and his misadventures because of his broken wand? His slugfest with Malfoy, his rebounding spells and Gilderoy Lockhart's memory loss can be attributed to the spellotaped wand.

I just love how Funko Pop! chose to depict Ron and his iconic spellotaped wand --- Genius!

It was in Book 2 of the Potter series, Harry Potter and the Chamber of Secrets, that Ron broke his wand.

“Come back!” Ron yelled after it, brandishing his broken wand. “Dad’ll kill me!”

Ron was having far worse problems. He had patched up his wand with some borrowed Spellotape, but it seemed to be damaged beyond repair. 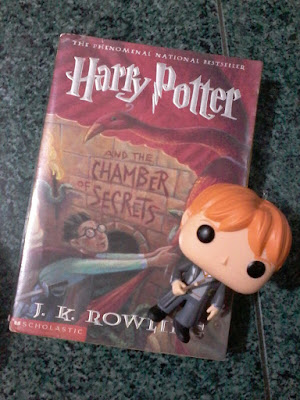 Ron whipped out his Spellotaped wand, but Hermione shut Voyages with Vampires with a snap and whispered, “Look out!”
Ron was holding up an ashen-faced Seamus, apologizing for whatever his broken wand had done...


You can purchase this Funko Pop! at any toy or hobby store. You can also get your fill of Funko Pop! in Amazon.com. If you're living in Cebu City, You can buy your Funko Pop! figures in Hobbiestock and Play 2 Learn.