21 Writers and Poets Who Died Tragically

Posted by Margaux Camaya, The Visual Traveler June 06, 2017
The tortured genius. The starving artist. The antisocial behavior. The free spirit. The wandering soul. The lost generation.

When we hear or read these descriptions, who comes to mind? Our answers will all be the same --- the writer, the poet, the author. Literary artists who live by the power of their words; the might of their pen. 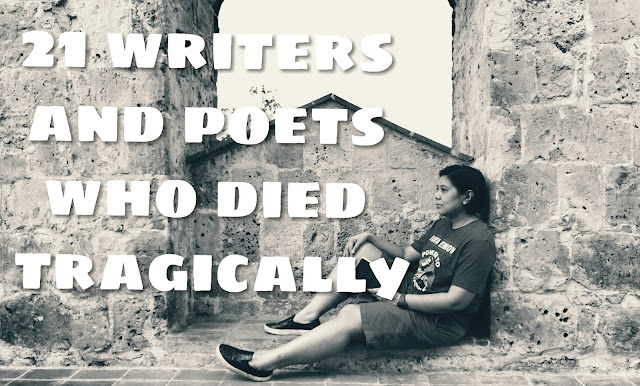 But I'm not here to talk about the quirks of their behavior or the majesty of their talent rather the tragedy that befell these masters of the written word that silenced their emotions and souls.

One of my favorite quotes from the campy movie, The Mummy, "Death is just a beginning" kept coming to mind when I was researching for this blog topic.

Death did not diminish the popularity of these artists but rather enhanced it; out of curiosity, created new audiences to their writings.

Suicide, Accidents, Depression, Alcoholism, Debilitating illness, these seem to be great plot ideas for a novel. But the reality is stranger than fiction; the lives of writers and poets were just a degree away from their themes or storylines. It was life imitating art.

The inspiration for this post came while I was reading "The Literature Book" from DK Books. The book is available at Fully Booked.

Romantic Poet and husband to Mary Shelley drowned in 1822 when the boat that he was riding sunk. Shelley was known for Ozymandias and Ode to the West Wind.

English Romantic Poet, Lord Byron, died in 1824 from a fever caused by Sepsis. Famous for the poems, She Walks in Beauty,  Don Juan, and Child Harold's Pilgrimage.

Considered to be Russia's greatest poet, Pushkin died in 1836 due to injuries sustained from a duel. His novel in verse, Eugene Onegin had the main protagonist killed in a duel.

The writer of "Wuthering Heights", died from Tuberculosis in 1848.

Anne was the third Bronte sibling to die within one year. The author of "Agnes Grey", developed Tuberculosis but succumbed to the disease in 1849.

Jane Eyre's creator, Charlotte, married in 1854 but died the following year when she experienced a difficult childbirth.

The American writer who popularized the Detective genre suffered from Alcoholism. In 1849, he was found dead and speculations abound regarding the cause of death.

The French Poet had a prodigious output from his teens until he reached the age of 21. Arthur Rimbaud died from Bone Cancer in 1891.

Zola was a French writer, playwright, and journalist. He was nominated twice for the Nobel Prize in Literature. He was found dead at his house in 1902. His death was caused by monoxide poisoning due to a blocked chimney flue.

An American writer who achieved celebrity status and wealth from his writings. He died in 1916 from various complications due to years of alcoholism and ill-health. The author is best known for his books, The Call of the Wild and White Fang.

Woolf was part of the "Bloomsbury Set" which included writers, intellectuals, and artists. Over the years, she suffered from depression and mood swings. She committed suicide by drowning in 1941.

Part of the Lost Generation, Francis Scott Fitzgerald had a troubled relationship with alcohol and depression. Fitzgerald is the author of The Great Gatsby, This Side of Paradise, and The Beautiful and Damned. It finally took a toll in 1940, when he had a heart attack at age 44.

Celebrated as one of Russia's greatest playwrights; Chekov wrote the plays The Seagull, Uncle Vanya, and The Cherry Orchard. He died of tuberculosis in 1904.

The Little Prince was written when he and his wife were in exile due to France's defeat and surrender during World War II. He joined the French Free Air Force and did Reconnaissance missions for them. In one of his trips in 1944, his plane disappeared and there was no trace of his plane or remains. In 1998 and onwards, part of his plane wreckage and a bracelet engraved with his name and his wife's were found in the south of Marseille.

Born Eric Arthur Blair, Orwell was known for his novels, Animal Farm and 1984 which were the precursor to the popular dystopian genre. He died, aged 46, because of tuberculosis.

Kerouac famously wrote his opus, On the Road, onto rolls of tracing paper that he glued together. The final draft was 120-foot long. His generation of writers was known as The Beat Generation. His alcoholism led to cirrhosis and his death in 1969.

Her writings and poems espoused Feminism. Years of depression and several attempts on suicide culminated in her death of carbon monoxide poisoning when she placed her head in the oven with the gas turned on. Her death was ruled as a suicide. She was awarded the Pulitzer Award posthumously.

His writing career spanned forty years. The author of Farewell to Arms, The Old Man and the Sea, and For Whom the Bell Tolls won the Nobel Prize in Literature in 1954. He committed suicide by shotgun in 1961.

Known as the founder of Gonzo Journalism, Thompson died in 2008 from a self-inflicted wound.

The author of the Millenium Trilogy died from a heart attack in 2004. His novels including The Girl with the Dragon Tattoo were published posthumously.

His suicide in 2008 cemented his cult status.  His masterpiece, Infinite Jest which was set in a dystopian world dealt with addiction, recovery, and the American dream and consumerism.

Author's note: Photos of the writers are from Wikipedia. I edited some photos to have the black and white theme.