Posted by Margaux Camaya, The Visual Traveler January 29, 2017
In about a day, the 65th Miss Universe Pageant will be telecast live from Manila, Philippines. The last time the Philippines hosted the event was in 1994 when Sushmita Sen of India won the crown.

This year's event will both be bittersweet and exciting since whoever wins will be crowned by the reigning Miss Universe, Pia Wurtzbach of the Philippines.
The second time a Filipina won the crown was in 1973. Margarita Moran was that year's winner of the Miss Universe pageant.

The following year, the Philippines hosted the Miss Universe pageant (1974) and Amparo Muñoz of Spain was declared the most beautiful woman in the pageant. That year also marked the first time the event was hosted in Asia.

Cebu was a designated destination in the 1994 pageant. The contestants had their photo and video shoots in Shangrila Mactan.

For this year's event, all of the 87 Miss U contestants visited Cebu on January 17 to have the Swimsuit Presentation and selected contestants also modeled for a clothing brand, Uniqlo. This time, they were billeted in JPark Resort and Hotel in Mactan.

But little was known of the short trip that the Miss Universe 1974 winners took on July 29-30 to the Queen City of the South. I tried searching for more information on Montebello Villa Hotel's official website but I found nothing.

The only proof that I have that Amparo Muñoz and her court stayed in Cebu was when I chanced upon their cemented handprints and autographs on my way to the hotel's main restaurant, La Terraza. 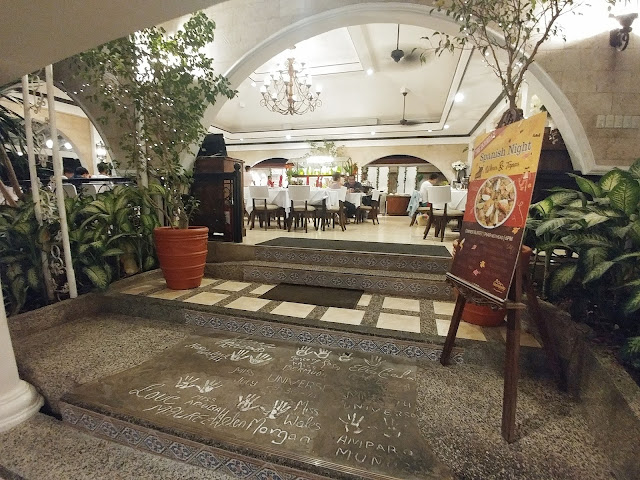 Montebello in 1974 was still a new hotel at that time and Mactan resorts were still years away in development. The hotel is currently owned by the Alvarez-Borromeo families.

After the grueling pageant events, I could only imagine that these beautiful ladies needed some rest and relaxation. And a trip to Cebu was an obvious choice.

I discovered the forgotten marker when I dropped my room key right on top of it and when I picked up the key, that was when I noticed the handprints.

I'm wondering how many hotel guests have noticed this little tribute to the Miss Universe winners.

The next time you have breakfast or stay in Montebello, try to take some time and look for the Miss Universe 1974 marker.

And I do hope the hotel add this little tidbit to their website.

P.S. Amparo Muñoz was asked to resign as Miss Universe 1974 due to unfulfilled commitments. Unfortunately, no one took over the rest of her reign.

Updated Info: A few hours after I posted this article, Montebello Garden Hotel took notice and came up with the trivia that the Miss Universe 1974 Winners were invited during the launch of La Terraza Restaurant. That's the reason why they visited Cebu after the pageant.


The trip was organized by the Minister of Tourism, Jose Aspiras. And according to some comments, the pageant winners also held a mini-motorcade when they were in Cebu.