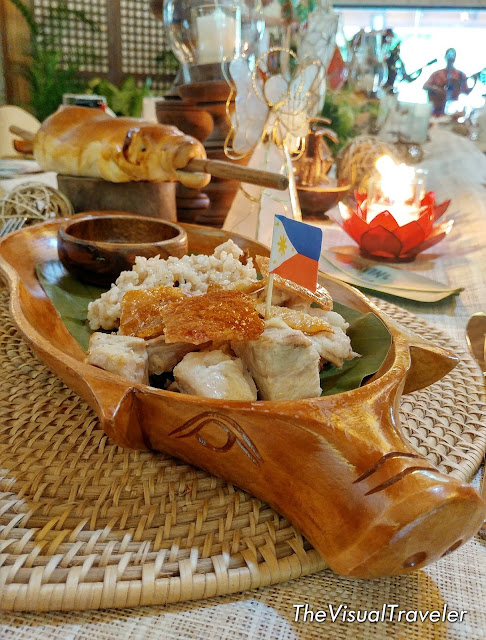 It all began with that fiery shot of candied martini also known as Gayuma ni Pepita.

A fluff of pink cotton candy in a martini glass that melts when the calamansi juice with lambanog (a type of Philippine liquor) is poured on it. A concoction that teases the taste buds and promises an afternoon of gastronomic delights. 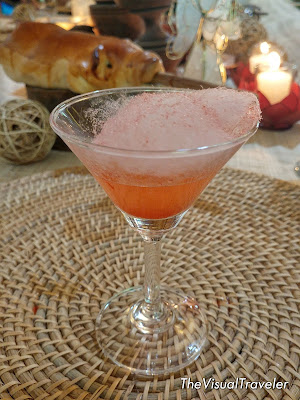 Dedet dela Fuente, owner of Pepita's Kitchen is also known as the Lechon Diva. She has upped the ante when it comes to presenting our humble lechon to different palates. She also specializes in bringing Filipino cuisine to the forefront of international dining by hosting her Degustacion parties.

When I was five years old I had my first multi-course dinner. My Uncle and Aunt brought us to a restaurant in Greenhills. I can't remember the name of the place but their specialty was steaks.

By the time I had the salad and soup, I could only have a few bites of the juicy steak that was the main course. My little tummy could not hold a lot of food in. I was so full, I couldn't even force myself to have some dessert.

It was a different matter during the luncheon hosted by Bluewater Maribago. The culinary experience was akin to taking a journey through the Philippines.

Luscious. Decadent. Indulgent. Sinful. These are the words that best describe the two-hour lunch that we had by the Lechon Diva, Dedet dela Fuente and her team comprised of Bluewater Resort staff.

All of your senses will be brought forth into service. This is one sensory overload that you would welcome.

There were more than 10 types of dishes that were served to us during that afternoon. I told myself that I needed to vindicate my five-year-old self.

Pica Pica ng Pepitas are three kinds of hors-d'oeuvre that consist of ingredients that we won't normally combine together.

Lucban Kiping was paired with Squid Ink Aioli and Tarlac Dilis. This was the crunchy appetizer and I wanted more of this while the Balut Salpicao on Cracker gave that exotic flavoring that would pique your interest. The balut was made into a spread. You wouldn't see any beak or feathers in it. 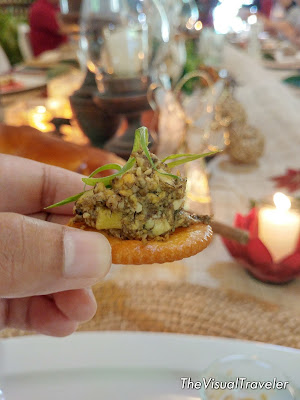 The Lechon Scone with Mr. Thomas Butter sounded so British that you can have it with a mug of English Breakfast tea. The scone has the right texture and its taste was enhanced with Lechon bits.

Mr. Thomas Butter's main ingredient is Mang Thomas liver sauce that quintessential partner of Lechon or roasted pig (if you're from Luzon). It was so good that I wanted to bottle up whatever was left and bring it home. The compound butter was silky, herby, and savory. It paired well with the sweet scone.


The Nata de Achara salad was a breath of fresh in an otherwise typical plate. The jelly-like texture of the nata de coco adds a punch to the mixed greens. Crunchiness comes from the cashew nuts topping the salad. The sweet and sour flavor of the dressing comes from the atcharang Nata de coco which hails from Pampanga.


The next course was a surprise for the guests since it wasn't on the menu. The salted egg craze was extended to Ms. dela Fuente's Hiplog. Hipon (Shrimp) and itlog na maalat (salted egg) combined to create a succulent encounter.

Noodles have been part of a Pinoy's diet since Chinese traders brought them to the Philippines. There are different kinds of pancit that are part of our food culture.

Every Bicolano who is worth their salt can't resist the charm of a plateful of Bicol Express. Tenderized Pork with green chilies or Lada cooked in coconut milk and mixed with pancit noodles awakened a childhood memory of mine.

The dish served in a bowl made of coconut husk and eaten with a pair of chopsticks was ingenious. I wanted more of this Bicol Express but I had to pace myself since we were only halfway through lunch.

I thought to myself that the Hayop sa Degustacion was specifically designed for me. Most of the food in the lineup are favorites of mine. I'm fortunate that I grew up in a household that puts a lot of emphasis on having seafood since there was a couple of it during that day. It also helps that I'm part-Bicolano and part-Kapampangan.

Stone crab claw restaurants are popular in Florida. The meat in a crab's claw is more compact and sweeter. In Chef Dedet's Sipit Sarap dish, she puts together a sauce made of the richness of taba ng talangka and coconut milk. Drizzles it on the crab claw and when you take your first bite, it tastes like a dream come true.

The Heavenly Sisig which was placed inside an intricately designed camote chip was extremely creamy. There was no aftertaste which normally comes with eating sisig.

In order to prepare for the highlight which was the two variants of Pepita's Lechon de Leche, they served Palate Cleansers made of ginger sorbet and calamansi sorbet.

The Ginger ice candy had a dash of chili that plays in your mouth while the calamansi one was something I could have all the time. The sticky sweetness was refreshing.

Ms. dela Fuente's lechon repertoire includes 21 different ways of cooking and preparing it. Her lechon de leche has been awarded in London as Tastiest Dish in Asia.

Truffle oil is normally used in Italian food particularly Risotto. By splashing this to our white rice and stuffing it inside a lechon, enhances the aroma and character of our roasted pig.

For those who are curious what Truffle oil tastes like, it's similar to olive oil but has a more robust consistency that lingers in your mouth.

To still retain the Filipino flair, it'accompanied by the Divalicious Labuyo sauce.

In the other lechon de leche dish, instead of pairing lechon with rice, it had marble potatoes. Mashing the crispy skin and fatty meat with potato was trance-like.

After the marvelous lechon de leche dishes, the Cholesterol Sweeper which is made of oatmeal, white chocolate, a secret fusion that contains a little bit of liquer made our indulgence a little less guilty.

The interlude worked for me. I don't normally enjoy oatmeal but I was able to finish the entire glass.

The imaginative Trio of Desserts composed of Super Suman, Guinataang Brulee, and Buko Pandan Macaron was the appropriate ending for that gratifying and fulfilling lunch party.

By this time, I could feel my tummy being filled with all the goodness the afternoon brought. But I plowed through and survived the Hayop sa Sarap na Degustacion. Without hesitation, I would do it again in a heartbeat.

To find out more about these inspired dishes, you can contact Bluewater Resorts.