How My Dad Influenced My Food Tastes 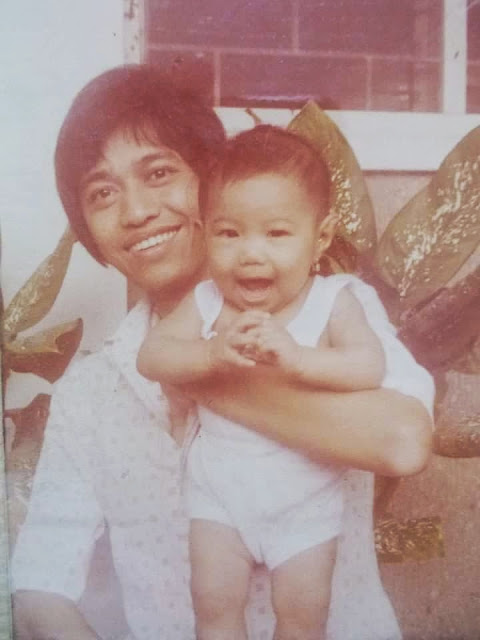 Over the years as I've started blogging about food, I've incorporated a lot of stories about my Dad. I've just realized how much he has influenced my taste in food.

Most of my Dad's career years were spent being assigned to different provincial posts and he never missed going home on weekends even if he had to take 18-hour bus trips from Cauyan, Isabela. He would always go home and be with us. He never came home empty-handed as well.

As my Dad got assigned from one Luzon region to another, the food varities that appeared on our dining table differed as well.

We've had tapang usa (deer) from Isabela, rock lobsters from Bataan, fresh lapu-lapu from Navotas, strawberries and Ube jam from Good Shepherd Convent in Baguio, Vigan longganiza, daing na bangus from Dagupan, Palawan casuy, Bulacan pastries and baked goodies, Adobong palaka from Pampanga, espasol from Laguna---I could go on and on about the distinct flavors we've tasted and eaten over the years.

We were lucky that we got the chance to partake of the food specialities from different regions. When we were younger, there wasn't much appreciation but now, looking back, we really were fortunate to have these experiences.

Below are just some of the excerpts that I've written about my Dad in my previous blog posts. I'd like to share them with you.

There's a memory of my Dad coming home from work bringing a big container of Quik, a humongous bag of M&M's, and tubes of Pringles. On other times, he would bring bags of Chip Ahoy cookies. In the early to mid-1980s, he was based in Olongapo City, Zambales and the United States Naval forces were still stationed in Subic. Thus, the abundance of imported goods to buy. Take note, that these were still the Marcos years.

Most of my growing up years were spent during the 1980s and 1990s. And if we wanted imported goods, especially American ones, we head on over to a PX store or those Duty-Free stores that mushroomed in Subic and Clark after the U.S. bases were converted into freeports.

When I was younger, my dad used to take us to this pizza place located along Quezon Avenue. It was actually a string of restaurants that was called Italian Village. I don't know if my contemporaries would recall this place.

I felt like I was in Italy walking on the cobblestone road and seeing brick buildings. The scent of freshly baked bread wafting through the 'streets' of that village adds to the allure. The crunchy breadsticks that are available to diners while waiting for your pizza order made one anticipate the arrival of the food.

My dad brought us there for birthdays or just for a special treat. It's a memory that I always keep. Maybe that's why I like eating pizza; when I bite into that baked dough topped with sausages, peppers, cheese --- it brings out a warm feeling.

My dad's cooking story is different. He was the seventh child out of eighth and he spent a lot more time with my grandmother during his childhood. He gained his skills in the kitchen through his mother. Her style was distinctly more Filipino compared to my grandfather's.

One of my dad's kitchen duties growing up was to cook the rice for their breakfast. We learned how to cook rice the old-fashioned way from him using a caldero and not in a rice cooker. It's easier to add water than to remove the excess.

It is quite a treat to watch my dad make his special chicken arroz caldo. There was even a time that he used some leftover turkey for his arroz caldo recipe.

He would quietly and masterfully go through cooking this dish without missing a beat. Arroz caldo is a simple and uncomplicated meal but it invokes a sense of comfort because of how it was cooked and who made it.

Last week, I tried my hand in re-creating my dad's arroz caldo. It came out decent and flavorful but still a poor second compared to his. Another dish of my dad's that I re-created in my own kitchen is his adobong pusit.

The theme of Sunday lunch at my parents' house is Seafood and Dad would prepare this dish which is always the first to be consumed enthusiastically by everyone. Perfect pairing for adobong pusit is fried fish.

I also learned from my dad how to be efficient and clean while working in the kitchen. You have to multi-task to avoid having heaps of unwashed dishes, pots, pans and utensils lurking in one corner of the kitchen.

Another culinary habit that we got from my father was the sawsawan or dipping sauce. For every dish that we have, there is a particular sauce to go with it.

For his arroz caldo, it has to be patis or fish sauce with calamansi; for his steamed or blanched vegetables (sitaw, okra, eggplant or whatever is available), it has to be vinegar (plain or sinamak) with bagoong and siling labuyo; nilagang baka goes well with soy sauce and calamansi; and when he eats his steak, there has to be A1 sauce on the table.

I could go on and on about my happy food memories with my Dad. In this post, I want to pay tribute to him and express my gratitude in instructing my palate to the enormous possibilites out there.

Happy Birthday, Daddy! I love you...