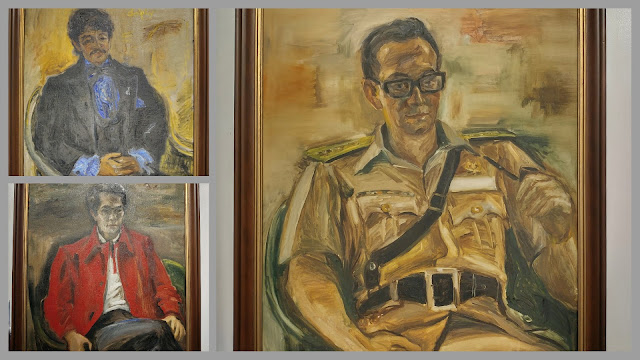 Federico Aguilar Alcuaz, National Artist for the Visual Arts (2009), painted a series of portraits in the early 1970s that featured celebrities and personalities from show business, the government, private sector, military and police. Alcuaz is known for his modernist style.

He has a dedicated exhibit hall in the National Museum of Fine Arts. Displayed outside the hall is his portrait series which is currently on loan from the Government Service Insurance System (GSIS) collection.

Lamberto Avellana was named as the first National Artist for Film in 1976 for his contributions to the Philippine movie industry.

His wife, Daisy Hontiveros Avellana, was also  honored as a National Artist in 1999.

The most recognizable and famous among these portraits would be the King of Comedy, Dolphy. His real name was Rodolfo Vera Quizon (RVQ productions) and started his career when he was 13 years old as a vaudeville actor during World War II. He later on entered radio and the movie industries.

In the 1950s, he was known to be a movie sidekick in almost all of Gloria Romero's comedy films. He became a lead actor when he co-starred with Lolita Rodriquez in the film adaptation of Mars Ravelo's Jack en Jill.

He was a versatile actor. One of my favorite films that he made was 1978's Ang Tatay Kong Nanay with a young Niño Muchlach.

A popular singer in the 1970s, Anthony Castelo is known for his hit song, Balatkayo.

James Barbers was a Police General and uncle of Robert Ace Barbers.

At the time when the portrait was painted in 1970, Juan Ponce Enrile was the Minister of National Defense under the Marcos Government. He would be part of the 1986 People Power Revolution that would oust Marcos. Enrile would be one of the longest-serving senators in the Philippines.

Fidel Valdez Ramos was appointed Chief of the Philippine Constabulary in the 1970s. He would be one of the key players in the 1986 People Power Revolution and become the 12th Philippine President in 1992.

Gabriel 'Flash' Elorde is recognized as one of the greatest Philippine boxers of all-time. He was a southpaw. He hailed from Bogo, Cebu.

Jose Garcia Villa was honored as National Artist for Literature in 1973. He was a poet, a writer, a painter, a literary editor, and a cultural attache to the Philippine Mission in the United Nations. He lived most of his life in the United States.

Some of Garcia Villa's poems would be considered distinct because of his style of using a coma after every word. American poet, e.e.cummings, was an admirer of his works.

Want to find out more about Federico Aguilar Alcuaz? Visit this website.

Anonymous said…
Have you ever thought about writing an e-book or guest authoring on other sites?
I have a blog based upon on the same ideas you discuss
and would really like to have you share some stories/information. I know my audience would enjoy your
work. If you're even remotely interested, feel free to send me an email.
January 4, 2020 at 2:18 PM