While researching about cockfighting or sabong in Spanish Philippines, I came across Republic Act No. 229 which was approved on June 9, 1948 by President Elpidio Quirino.

An act to prohibit cockfighting, horse racing and jai-alai on the thirtieth day of December of each year and to create a committee to take charge of the proper celebration of Rizal day in every municipality and chartered city, and for other purposes.

I found it a little bit ironic since in Noli Me Tangere, Jose Rizal dedicated an entire chapter to the sport of cockfighting.

The Spanish Colonial Government deemed cockfighting legal because they earned from the licenses that they issued.

They designated Sundays, festive holidays and Thursdays (Manila only from 1861) as cockfighting days. It was considered as one of the favorite pastimes of the Philippines during the Spanish Colonial period. But the spectators and gamblers were mostly men.

William Henry Scott narrated in his epic book, Barangay Sixteenth-Century Philippine Culture and Society, that Antonio Pigafetta was the first European who observed and wrote about cockfighting in Palawan during their frantic escape from Mactan and Cebu in 1521. In Southeast Asian cultures, cockfighting has religious significance in public ceremonies and can be traced as early as the 12th century. Depictions of cockfighting can be seen on temple friezes found in Angkor Wat, Cambodia.

Rizal was an expert in describing the local customs, culture and traditions of the Philippines. While writing Noli Me Tangere in the 1880s, he was already living in Spain for a number of years.

In Chapter 47, titled The Cockpit, plans and deceptions by Crisostomo Ibarra's enemies are slowly being set in motion.

I've dissected the chapter into different parts to better understand the events and characters. The following excerpts from Rizal's Noli Me Tangere were translated by Leon Ma. Guerrero.


"Since the Government of that day allowed and even promoted cockfighting with the regulation that it should be held only in the public squares on holidays (to give everyone a chance to see, and to encourage by example?) from the end of High Mass until nightfall..."

"It was no different from those in other towns except in minor details. It had three main divisions. The entrance was a large rectangle approximately twenty metres by fourteen. There was a door in one of its sides, usually in the charge of a woman who collected the entrance fees, amounting to some hundreds of thousands of pesos a year, and it was said that the money vice thus paid for its freedom was used to build magnificent schools, bridges, and highways, and to institute awards for the development of agriculture and commerce. Blessed the vice that produced such excellent results!"

"In this compartment of the cockpit might be found the peddlers of betel nut, cigars, sweetmeats, and other eatables; here also were many young  boys with their fathers or uncles, who were thus solicitiously introducing them to the secrets of adult life."

"This enclosure led to another slightly larger one, a kind of lobby where the public gathered before an actual cockfight. Here were to be found the majority of the fighting cocks, held to the ground by a cord fastened to a bone or wooden nail; here were the gamblers, fanciers, and gaffers. Here bets were crossed, form studied, money borrowed amid oaths, promises, and loud laughter. In one corner a sportsman handled his fighter cock, stroking its brilliant plumage; elsewhere, another counted and studied the scales on a game cock's legs; still others recounted the feats of past victors. But there were also to be seen many crestfallen gamblers, holding a plucked carcass by its legs; the bird that had been its master's favourite for months, fondled, watched over day and night, the centre of so many dazzling hopes, was now only a carcass to be sold for a peseta and cooked with ginger and eaten that very night. Sic transit gloria mundi! So doth the glory of the world pass way! The loser returned home to his anxiously waiting wife and raffed children, both penniless and cockless. Of all those golden dreams, the solicitude of months from daybreak to nightfall, of all the work and hardship, there only remained a peseta, ashes after so much smoke."

"This place led to the pit proper or ring, whose floor, surrounded by a bamboo fence, was higher than the other two compartments. In its upper part, almost reaching the roof, were stands for the spectators or, for they came to the same thing, the gamblers. During the fights these stands were filled with men and boys, shouting, cheering, sweating, quarreling, swearing: fortunately there were almost never women there. In the ring itself were the men of distinction, the wealthy, the famous gamblers, the concessionaire and the referee. The birds fought on the perfectly leveled ground, from which Destiny distributed laughter or tears, plenty or want."

"To the cockpit went the poor man to risk what little he had in order to make money without working, as well as the rich man who went to amuse himself with the money left over from his parties and thanksgiving masses; but at least the latter was staking his own money and his cock was trained with great care, perhaps with even greater care than his own son, his successor in the cockpit, so this was no ground for complaint." 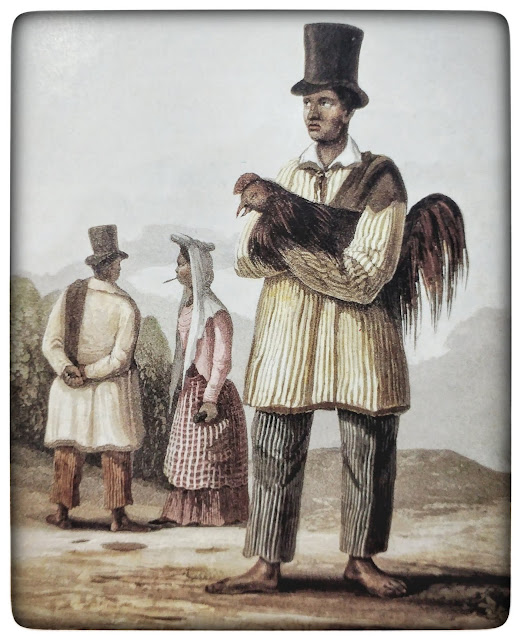 "...Some men were fashionably dressed and were followed and surrounded by those who fancied their fighting cocks. Others, dirty, their gaunt faces marked by vice, anxiously attended the movements of the wealthy and placed bets for them; pockets can be emptied of their money but not the heart of its passions. Here were no long faces; the indolent, apathetic, taciturn Filipino was not to be found here; all was movement, passionate, eager, driven by a thirst only sharpened by the muddy waters with which one thought to slake it."

"This Sunday the Mayor, Capitan Pablo, Capitan Basilio, and Lucas, the scar-faced man who had felt the death of his brother so keenly, were early at the cockpit."

"Capitan Tiago arrived at this point. Like all the big gamblers, he was wearing a Chinese linen shirt, woolen trousers, and a straw hat."

"Constabulary soldiers were moving about in crowd. They were not in uniform but neither were they in civilian clothes. Denim trousers with red stripes, shirts stained blue from their jackets, fatigue caps: this was a disguise in keeping with their manner. They gambled as they policed, and disturbed the order which they were said to keep."

"...two young men, who appeared to be brothers, looked enviously at the gamblers. They approached some with embarrassed whispers, but nobody paid any attention to them and they grew more downcast with every rebuff, exchanging looks of chagrin and despair. Lucas observed them slyly with a malignant smile..."

"...'Of course, I know you. You are Tarsilo and Bruno, a pair of strong young men. I know also that your brave father died because the soldiers were giving him a hundred strokes of the lash a day. And I know that you have no intention of avenging him.'.."

"The circle of gamblers and onlookers quickly spread the news that two famous birds would be fighting each other; each had its own history and merited fame. Everyone wanted to see and examine the two celebrities; opinions were given and prophecies made."

"Voices were raised in the increasing hubbub; the ring was filling up and the stands were being taken by storm. The handlers were carrying two birds to the pit, one red, the other white, already armed but with the gaffs still sheathed. Shouts were heard for the white and one or two for the red. The white was obviously the favourite."

"Meantime the pit had been cleared; the cockfight was about to start. The shouting was dying down. Only the two handlers and the gaffer remained in the centre of the arena. At a signal from the referee, the gaffer unsheathed spurs, and the fine razor gleamed bright and threatening."

"The handlers held the birds with subtle skill so as not to be slashed by the razors. A breathless silence fell; one might have thought that all present, except for the two handlers, were dolls out of some nightmare waxworks. The gamecocks were brought together, the head of one held tight while the other pecked at it and infuriated it, afterwards the reverse. Every duel must be fought on equal terms, be it between Parisian cocks or between Filipino gamecocks. Then the birds were brought face to face, nearer and nearer, so that each wretched fowl might recognize the enemy that had plucked out its feathers and which it now must fight. Their hackles rose and their small round eyes, vibrant with hatred. The moment had come: they were placed on the ground at a certain distance from each other and left alone."

"They advanced slowly, their steps audible on the hard ground; no one in  the cockpit spoke or breathed. Raising and lowering their heads as if measuring each other with their eyes, the gamecocks uttered sounds, threatening or perhaps scornful. They caught sight of the razor blades, gleaming with a cold blue light; danger stimulated them, and they approached each other with determination. But a step apart, they stopped, and with fixed eyes lowered their heads and raised their hackles. At that moment blood rushed into their tiny brains, their anger flashed like lightning and with all their natural courage they hurled themselves impetuously upon each other, beak against beak, breast against breast, steel spur against its fellow, wing to wing: but the blows were parried masterfully, and only a few feathers fell. They sized each other up once again. Suddenly the white cock leapt up, slashing with the deadly razor, but the red cock had bent its legs and lowered its head and the white cock hit only the empty air. As it landed it turned quickly to protect its back and faced the red cock. The latter attacked it furiously, but it defended itself with complete self-control. It was not the favourite for nothing. Everyone followed the ups and downs of the duel with the first draw of the blood; for the Filipino, following the laws of his Government, it was a duel that only death or flight could end. Blood soaked the ground of the pit; the brave encounters were repeated again and again; but victory remained uncertain. At last, in a supreme effort, the white cock hurled itself forward to give a final blow; it nailed its spur in one of the red cock's wings, where it caught in the bones; but the white cock had itself been hit in the breast, and the two birds, panting, exhausted, drained of their life's blood, one joined to the other, were still, until the white cock fell, blood spurting out of its beak, its legs jerking in its last agony. The red cock, bound to it by the wing, remained standing beside it, but little by little its own legs crumpled and its eyes closed." 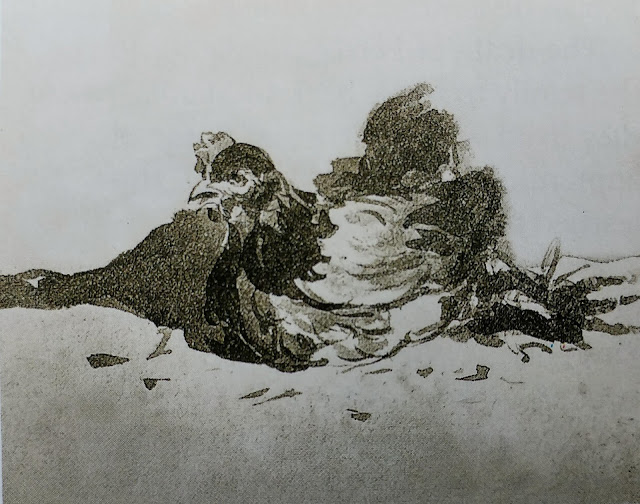 "The referee, in accordance with official regulations, declared the red cock the winner. A savage roar greeted the verdict, a roar heard through the town, sustained and long drawn out. Whoever heard it from afar would have understood that the favourite had lost. So it is among nations. The small nation that achieves a victory over a larger one tells and sings of it forever after."