Sleepy Santo Niño 400 Years After was created by Cebuano sculptor Fidel T. Araneta in 1965 to commemorate the 400th anniversary of the arrival of Miguel Lopez de Legazpi, his expeditionary forces, and the beginning of Spanish Colonization in the Philippines.

It was also a symbol of how Christianity particularly Catholicism became ingrained in the historical, cultural, religious, and social consciousness of the Filipinos.

This wooden sculpture by Araneta is currently on display at the National Museum of Fine Arts in Manila since July 2019. It was donated to the nation by the artist.

Sculptor Fidel T. Araneta was born in Bogo, Cebu in 1911. He studied at the University of the Philippines School of Fine Arts but was unable to complete his studies. He studied under National Artists, Fernando Amorsolo and Guillermo Tolentino. He became an early mentor to National Artist Napoleon Abueva. He had a successful career as a commercial wood sculptor in Cebu. He died in 1975.

The depiction of a sleeping Santo Niño or Child Jesus is unusual in Philippine Religious Art. In Araneta's sculpture, the weary Santo Niño uses his orb as a pillow while his crown is beside him. His imperial regalia is clearly identified with his robe and boots.


The one thing that a devotee would find different would be the orb without its cross. It could have been an aesthetic decision on the part of Fidel Araneta since the cross would hide the Holy Child's face.

Around the base of the sculpture, the Cebuano artist carved the following words: Sleepy Santo Niño 400 years after by Fidel T. Araneta, Cebu. 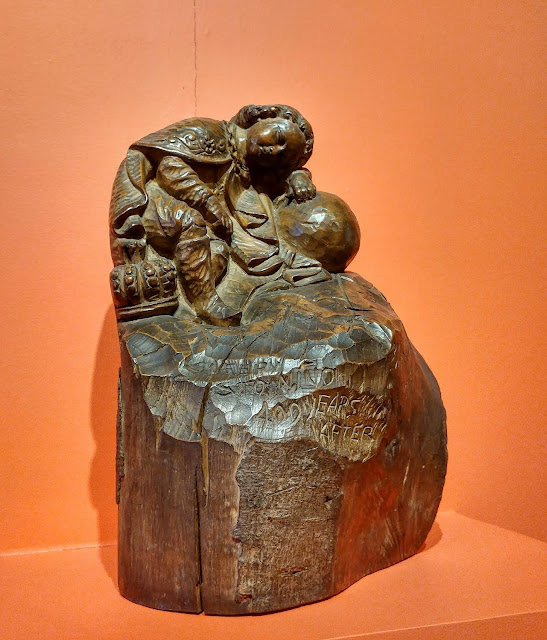 Historical speculation traces the origin of the statue of Cebu's Holy Child Jesus to Ferdinand Magellan's expedition in 1521 when it was gifted to Raja Humabon's wife Juana during the baptism of the locals. It was made by a Flemish artisan and brought along the Magellan-Elcano expedition with other religious artifacts.

If we consider the arrival of the Holy Child statue with the Magellan-Elcano expedition in 1521, it would predate the Infant Jesus of Prague. The holy relic would have been created before 1519, the year when the expedition left Spain.

The veneration of the Santo Niño in the Philippines especially in Cebu can be traced to the year 1565 when a religious icon of the Holy Child Jesus was discovered by a Basque sailor, Juan de Camus. The sailor was part of the Lopez de Legazpi expedition who successfully reached Cebu. The holy icon was found in one of the burnt houses of the local Cebuanos after the bombarment done by the Spaniards to the coastal settlement of Cebu.

"A sailor from San Pedro, Juan de Camus, a native of Bermeo in Vizcaya, accompanied by an artillery man of the same ship, Pedro de Alorga, entered the house where a slave was staying. They found two boxes tied up with cord from Castile, ready to carry out together with the owner's belongings. They opened one of the boxes and found only the tusk of a wild boar and a large bowl. When they opened the second box, made of pine (this wood is not found in these islands) and tied with cord from Castile, they discovered inside it the carving of the Child Jesus. Ecstatic beyond himself, Camus ran out screaming about the find, allegedly crying in his native Vizcayan tongue: "For the Body of Christ, Son of Saint Mary has [been] found." Quote from Santo Niño De Cebu 1565 - 2015 (450 Years of History, Culture and Devotion) by Fr. Pedro G. Galende, OSA

Cebu's Santo Niño is known as the oldest religious artifact in the Philippines and is being kept in the Basilica Minore del Santo Niño in Cebu by the Augustinian Order.

Venus L. Flores said…
a beauriful work of art showing the artistry, skill and devotion of the sculptor for the Santo Niño.

Danielheller said…
Thanks a lot for the kind of perfect art based topic I have not a lot of information about it but I have got an extra unique info in your unique post. Perfect description you have provided thanks for sharing.
June 20, 2020 at 1:03 PM