Impressions on Arthur T. Vanderbilt's Fortune's Children: The Fall of the House of Vanderbilt

Posted by Margaux Camaya, The Visual Traveler January 12, 2015
How do you squander a great fortune? That's the first question that came to my mind when I started reading Arthur T. Vanderbilt's book, "Fortune's Children: The Fall of the House of Vanderbilt." 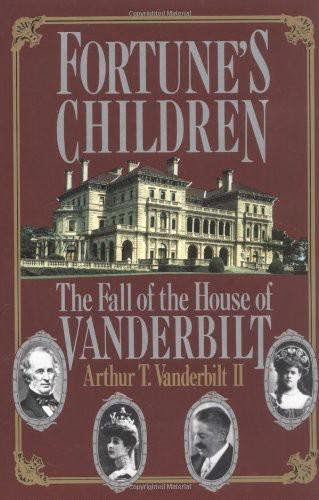 One of the popular American journalists of the 21st Century is Anderson Cooper. And Mr. Cooper is a member of New York's House of Vanderbilt.

Anderson Cooper is also not the first member of his family to be involved with Journalism. Cornelius Vanderbilt IV became a member of the fourth estate in the 1920s. He lost his fortune when he ventured into newspaper publishing.

Cornelius IV's cousin, Gloria Laura Vanderbilt, was nine years old when the New York Press named her "poor little rich girl". She was caught in the middle of a highly-publicized custody battle between her widowed socialite mother, Gloria Morgan Vanderbilt and her aunt, Gertrude Vanderbilt Whitney.


Gloria grew up to be a celebrity, fashion designer, artist, and the mother of Ansers9n Cooper. She dated Errol Flynn and Frank Sinatra. She married four times and introduced 'branded' blue jeans through her own label, Gloria.

The Vanderbilt wealth was at its pinnacle during the Gilded Age when income taxes were non-existent and accumulation of wealth was the priority.


In the 1880s to the 1900s, there were at least six Vanderbilt-owned mansions on New York's Fifth Avenue and four Newport summer mansions (the most famous of them is The Breakers).

Consuelo Vanderbilt, the eldest and only daughter of William Kissam Vanderbilt married into the British Aristocracy. She was one of the American heiresses known as the "Dollar Princesses" who entered British society through marriage. Consuelo's first husband was Charles Spencer-Churchill, 9th Duke of Marlborough. They had two sons and all the succeeding Dukes of Marlborough would carry the Vanderbilt genes.

But in less than five generations, the Vanderbilt wealth will be diluted and threatened. Profligate spending, divorces, lack of business vision, squabbling---these are the all hallmarks of how to lose a fortune.

Arthur T. Vanderbilt easily narrates one family's journey from humble beginnings in Staten Island to East Coast railroad magnates to New York Society's darlings to British Aristocracy to a family in aimless wandering. Their story is told alongside those of New York's memorable Society characters as well as significant historical events.


This is a recommended read to those who are interested in American society, culture, business, history or for someone who is just looking for something good to read.

All photos courtesy of Wikicommons.