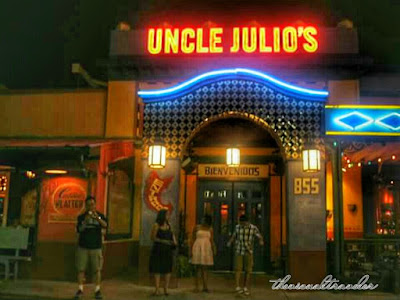 During my trip to Illinois, I had an opportunity to have dinner at one of Chicago's best Mexican restaurants, Uncle Julio's. I was brought there by my cousins and it was definitely a dinner to remember.

When we got to the restaurant, we had to wait for a little while since there was already a line of hungry diners waiting to be seated. Waiting for your table is never boring at Uncle Julio's, you can order and enjoy some thirst-quenchers at the bar. I ordered my usual cocktail, a mojito. Their Bar area is separate from their Dining area which we don't see a lot here in the Philippines.


We waited for about 20 minutes when the hostess finally escorted us to our table. I was super excited about dinner since Mexican food is a favorite of mine. I could hear my stomach grumble from hunger.

For appetizers, we started with Ceviche Fresca and some hand-rolled chicken tamales. Their ceviche or kinilaw for us, Filipinos, is made up of Gulf shrimps, scallops and tilapia marinated in both lemon and lime juice. It also has tomatoes, onions, and cilantro. They serve this together with crispy tortilla chips. It was a refreshing dish to start dinner with.


The tamales that I grew up with is different from the Mexican tamales. Ours is a sweet dish that's similar to a rice cake. The Mexican tamale is a savory dish that's made from cornmeal (masa) with meat in it. We had the chicken tamale with a choice of sauces, either salsa verde or creamy hatch chili sauce. And it was delicious, but may be a bit heavy as an appetizer.

And for the entree round, we had the Plato Grande to share that had chicken and steak fajitas, bacon-wrapped Camarones (shrimps), slow smoked pork ribs, fresh guacamole, sour cream, pico de gallo, Mexican rice, fresh jalapeno, sauteed peppers, onions, and homemade flour tortillas. It was a super platter with all of the food in it.

All of the meat and shrimp were mesquite-grilled to have that smoky and delectable taste. It was a scrumptious supper indeed! I think I gained some pounds with that meal! I had to loosen my belt afterward.

I wanted to replicate the Camarones since it was stuffed with Monterey Jack cheese and bacon-wrapped. Who doesn't love bacon!

Everything was fantastic--- the ribs were juicy, the steak and chicken were flavorful and went well with the soft tortillas.

The Plato Grande was a carnivore's dream come true --- it was a smorgasbord of meat and seafood.

Uncle Julio's tortillas are super fresh since they make them at the restaurant. You can actually see the tortillas being made.

Having eaten all of that food, I thought we were done for the night but then four plates of amazing sweet desserts suddenly appeared on our table.

I never had Sopapillas which are Mexican puffed pastries that are coated with cinnamon and powdered sugar. It also had honey for dipping. It tastes similar to a donut but softer and fluffier. A truly finger-licking good kinda dessert with all that cinnamon and sugar.

Our second dessert was a Coconut flan that is made with creamy coconut flavored egg custard topped with toasted coconut. I love flan but ours are just made with egg custard. Maybe it's a good idea to experiment with coconut, the next time we make some.

The third sugar-filled dessert was a Cajeta. Again, a first for me and my taste buds. Uncle Julio's cajeta is made of vanilla ice cream with toasted coconut, pecans, homemade caramel sauce and whipped cream. Delicioso! I'll be dreaming about this tonight.

That August summer night is truly an unforgettable experience for me!

O, how I wish we had Uncle Julio's in Cebu!