Posted by Margaux Camaya, The Visual Traveler May 19, 2016
A couple of months ago, I was grocery shopping when I chanced upon this new Coca-Cola soda. The Coca-Cola Life uses cane sugar and stevia as sweeteners. It also boasts that it has 35 percent fewer calories than regular Coke.

The image that they want to project with Coke Life is that it's way better, healthwise, compared to normal Coke. It even comes in a different color packaging --- green. 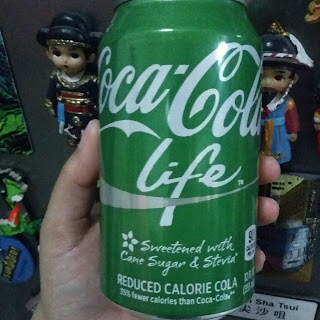 Coke really knows how to stay in the game. It reinvents itself and makes themselves relevant to the trending market.

I must say, you can taste and feel the difference. It has a smoother taste and texture. It doesn't have that sugary after taste that stays in your mouth after drinking Coke. You also don't feel bloated after drinking it. It's a bit expensive compared to regular coke.

Maybe it's just my imagination, but I feel that whenever I drink Coke Life, it doesn't have that addictive factor. I don't crave for it as much as I want the normal Coke.

Cane sugar being used in a Coke recipe was originally introduced in Mexico. Instead of using the high-fructose corn syrup which is the enemy of health advocates, North American Coca-Cola company started using cane sugar and stevia. They launched new Coke Life in 2014.

How I wish that the Philippine market will have the plastic and breakable bottles available for Coke Life. How cute will that be?!
food