Posted by Margaux Camaya, The Visual Traveler March 19, 2017
While staying at my parents' house, I was rummaging through my old bookshelf when I found a book that I bought years ago. The coffee table book, Philippine Picture Postcards, is a compilation of postcards of Filipiniana scenes made during the American Period, 1900s to 1920s. The author, Jonathan Best, curated postcards from his own collection and that of his friends and acquaintances. 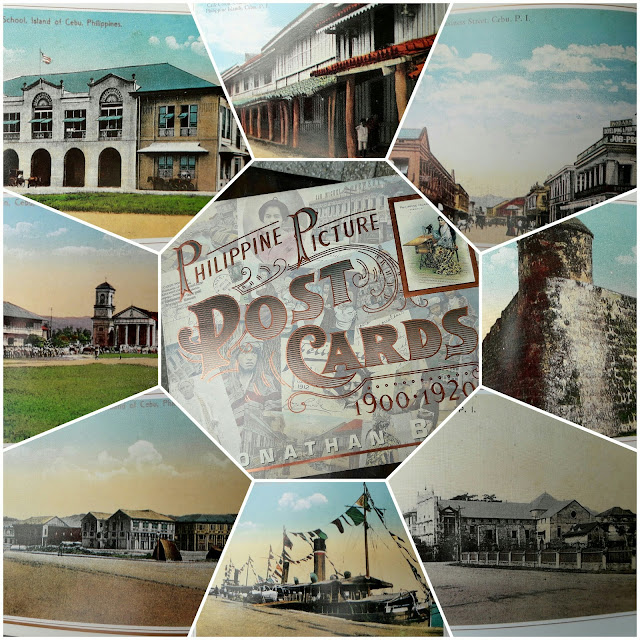 There was an increase in the popularity of postcards in the late 19th Century as photographic technology and printing improved. Most of the scenes that are in this article shows the chromolithography method of multi-color printing. Black and white photos are shot and then printed in color using this innovation. Chromolithograph saw a decline when World War I started in 1914 due to European printing companies, particularly in Germany, being affected.
I got this book when the annual Philippine Book Fair was still small and could fit in SM Megamall's exhibition area. But now, the book fair has become an international event that attracts thousands of booklovers and bibliophile from all over.

Having been a Cebu resident for the past 10 years, I've tried to learn things about the province. Manila has always been the center of everyone's attention but Cebu is equally important in our History. Being one of the first islands that Ferdinand Magellan and Miguel Lopez de Legazpi set foot on upon arrival in the Philippines.

And when the Americans started their occupation of the Philippines, Cebu played a major role in their governance of the country.


As the American period in our History started, there grew an interest among Americans back home of seeing the newly acquired Philippine Islands and it's inhabitants. Portraiture and geographical photos of the landscape and people became hot topics for picture postcards.


The eight vintage postcards showing scenes of Old Cebu were taken during the American Colonial period of the 1900s to 1920s. You can see a country that is slowly emerging and changing from one colonial influence to another but still retaining that distinctly Filipino culture.


Named after the Portuguese explorer who "discovered" the islands in 1521, Ferdinand Magellan, the street is located in the heart of downtown Cebu. It is known as the Business District of Cebu. Calle Magallanes was lined with various businesses that catered to the needs of the growing population of the city.

The street was originally where the influential and rich lived until the mid-20th Century when these families started moving uptown and selling their lots to businesses.

The Cebu Provincial High School was established in 1906 during the American Era. The Americans were big on the idea of Education and the Public School System. It went through several changes until finally being renamed to the Abellana National School named after one of Cebu's earliest governors, Hilario Abellana. The school is located along the busy Osmeña Blvd.

Older than Fort Intramuros, Fort San Pedro was built by Miguel Lopez de Legazpi's soldiers in the late 1500s. It has 4 turrets that measures just 30 meters high. It served as a Military garrison from the Spanish to the American periods.


The present-day Fort San Pedro has been repurposed as a Museum; it is popular with tourists and locals alike. There is a minimum entrance fee to get inside the fort.


The educational institution has changed hands as many times it has changed it's appearance. It was founded in 1595 as Colegio de San Ildefonso. It is the oldest school in the country.

Plaza Washington
For some this may come as surprise that there was a Plaza Washington in Cebu during the American period. The location of the plaza is where the Freedom Park now stands. The University of San Jose Recoletos is right across the area.


Nowadays, the area is a cabal of flower sellers.

Cebu might look different from what it was during the American Colonial period but one thing that hasn't changed is of Cebu being a bustling port.

The following postcards are proof of how vital sea commerce was and is for Cebu.

There is nothing wrong about nostalgia. It helps connect the past to the present and the future.
cebu History travel