Posted by Margaux Camaya, The Visual Traveler April 20, 2017
Colon Street in Cebu City has the distinction of being known as the oldest street in the Philippines. Throughout its more than 400 years of existence, Colon has been the center of trade, fame, prominence and even notoriety.

Named after the famed Genovese navigator and explorer, Cristobal Colon or Christopher Columbus, Colon street appeals to tourists and locals alike. Bargain shopping and deals abound the various establishments that surround the street. Its historical and commercial value cannot be surpassed.


Similar to going to Quiapo or Divisoria or Recto, one has to be on high alert and aware of everything that's going on around you. It doesn't help that the years of neglect and the "I don't care" attitude added to the atmosphere of grittiness and griminess that exudes from Colon.

Last Friday, I was doing research for an article I was planning to write about Colon when I came across a couple of posts pertaining to Heritage Markers that can be found in the area. I got excited because I've been to Colon several times but never have I seen any of these markers.

What's the significance of these markers? Each one tells a story of how important Colon street is. The people, places, and events represent Cebu and its history.

I immediately decided to search for these markers. Good Friday was actually the best time to visit Downtown Cebu since most locals would either be out of town or at home in observance of the Religious Holiday. Lesser vehicular and foot traffic means more time to leisurely seek for the heritage markers.

Upon arriving in the place, we decided to start from Metro Colon and walk towards the Colon Obelisk. Searching for the historical markers was like looking for a needle in a haystack. We didn't know where the markers were placed; if they were distinguishable or not. It takes some dedication and enough curiosity to seek these symbols.

In less than an hour, we were able to find 12 plaques honoring the past. We also saw frames or standees where markers no longer exist. There were markers that were vandalized or simply in disrepair. Is this a reflection of the state of apathy that we are in?

The Women International League (WIL-Hapsay Sugbo Foundation) had the noble idea of dotting Colon of historical markers to tell the history and cultural significance of the place. But it's unfortunate that proper maintenance was not done.

We boast that Cebu has a rich cultural heritage but how can we fairly claim to this if we do not preserve and take care of what we have. We travel thousands of miles and spend money going outside of the Philippines to marvel at their landmarks, not realizing that ours is equal to or even better than what other countries have.

Let me share with you the Colon Heritage Markers that we located along the route. I've used the descriptions found on the plaques to accompany the photos that we took. Some of the buildings are still on site but in great need of restoration.

This was the oldest playhouse in Cebu established in 1895 by Gen. Inocencio Junquera. This was where various dramas, operas, literary-musical programs, and cinemas were held.

It was also the preferred venue for civic affairs in 1901, Gov. General William Howard Taft and the members of the Philippine Commission spoke before Cebuanos gathered at Teatro Junquera.

In 1902, Vicente Sotto staged his play, "Ang Gugma Sa Yutang Natawhan". It was the Playhouse for the coming of the silent films.

In 1920, Don Jose Avila bought the Teatro and renamed it Cine Oriente.

This turn-of-the-century moviehouse was first owned by F.C. Arey and eventually bought by Don Jose Avila who renamed it Cine Ideal.

For this and other reasons, Don Jose Avila was known as the "Theater King of Cebu" and "Cebu's Father of Show Business" as it was through his initiative and vision that cinema entertainment grew in Cebu.

Cinema was introduced in Cebu in 1902 through the "Cinematografo electro-optico luminoso Walgraph" in a warehouse along Magallanes (known then as Calle de la Infanta).

In the years that followed, films were shown only in makeshift structures. The early cinematograph was just an apparatus that could be moved from place-to-place, until the advent of permanent theaters.

Still a significant heritage landmark in Colon which featured a grandiose classical design and nude sculptures by the Italian artist Dante Giudeti, it was inaugurated in the 19030's by the owners, Agustin and Beatriz Jereza.

The Vision Theater should be declared a historical landmark not only because of the strength of its foundation (sometime in the mid-1940's, many people tried to chip off the concrete walls in order to get the steel rods but they were not able to get through) and also for the grandeur of its design.

In 1953, a Cebuano film "Kapintas sa kinabuhi", written and directed by scriptwriter Eugenio "Gen" C. Labella was shown there. His wife, Esterlina Colina, was the movie's leading lady, and Bert Nombrado was the lead actor.

Many of the prominent schools and universities in Cebu today have at one time or another set-up shop along one section in Colon where it intersects Jakosalem street.

The Southern Institute, founded in 1927, was originally as elementary and High School. Founded by Don Agustin Jereza, his wife Dona Beatriz Duterte Jerez, her sister Dona Soledad Sanson, and other prominent Cebuanos. Its home was a 7-room Bahay na Bato with tiled roof. Later, it was moved to Mabini Street and became the Southern College and then as the University of Southern Philippines. 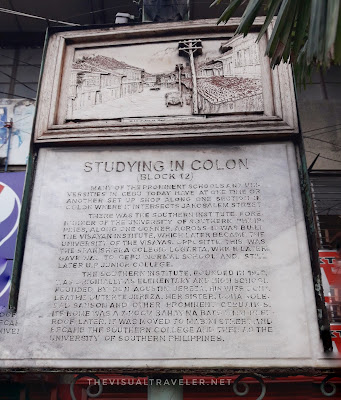 The Vanos were descended from a Portuguese gentleman, Don Juan Reyes, whose daughter Mariquita married Don Jaime Vano, a Spanish mestizo from the Ilocos. The Vano descendants married into such affluent mestizo families as Corominas, Garces, Vano, Escano and Sanson. 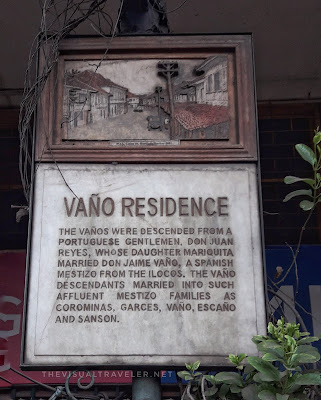 The niece of Don Victoriano Osmena, Dona Januaria Osmena Sison lived here with her husband, Don Guillermo Tamayo. One of their sons grew up to be the well-known artist, Camelo Tamayo, former head of the Department of Fine Arts of U.P. College-Cebu. Prof. Tamayo is noted for his rendering of the elegant Spanish Churches in Cebu as well as his whimsical tartanilla paintings. 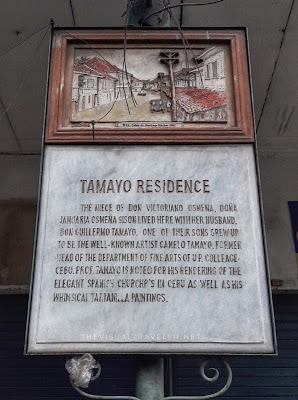 Originally, the home of Gavino Sepulveda, a Cebuano who fought in the Filipino-American War.

In 1926, one part became Casino Espanol De Cebu, an exclusive clubhouse for the affluent Spanish Residents while its other part became Menzi, a Paper Company.

In 1981, Henry Uytengsu transferred his Ding How Dimsum House, Cebu's original Dimsum restaurant to this location. 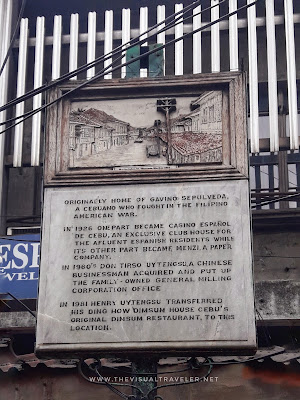 It was one the original site of the Lu Do Copra Plant which was established in 1896. It is the biggest single unit copra crushing plant in the Far East.

LuDo, an immigrant from Amoy, China established a copra crushing plant on a lot on colon street which he had leased from Venerando Reyes in 1896. Ludo, known to the natives as Iyo Owa, started a soap and candle business which survived the revolution. He took in his only son, Lu Ym as his partner in 1907. And the two went into mechanized production, thus expanding the plant which they transferred to Plaridel St. on the site of the present 5-storey Lu Ym Bldg and later to San Nicolas; The present site, the San Nicolas plant is now the Lu Do and Luym Corporation which is considered the biggest single unit copra crushing plant in the Far East. 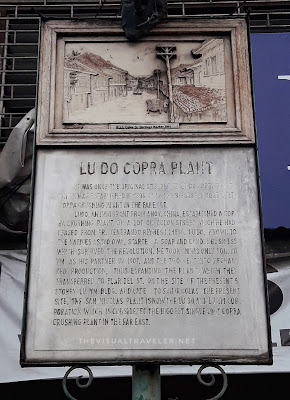 The Ice Plant was originally named Cebu Ice and Cold Storage Plant by the owner, Don Mariano Veloso, one of the wealthiest men in Cebu. Don Ramon Aboitiz, son of a Basque immigrant who had settled in Leyte, bought it from Don Mariano in 1917 and later renamed it Cebu Ice and Cold Storage Corporation. It was first located at Plaza Washington and Calle Comercio, and later transferred to this site, on land which the Aboitiz Family bought from Don Pedro Royo. 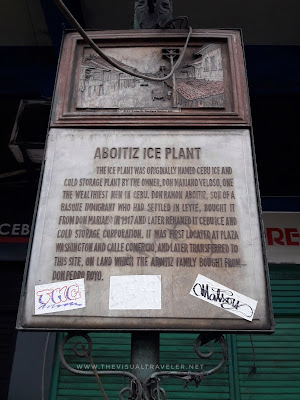 To print his two-publications, "The Cebu Advertiser" and "Ang Tigmantala", Don Jose Avila purchased the Imprenta Avila in 1922.

It was in the Visayas paper, "Ang Tigmantala" that Paul Gullas, Pedro Lopez, Ramon Abellanosa and other noted journalists hones their writing skills. The editor was Gaudencio Pena.

This was in the 1920s up to the 1930s, considered the Golden Age of the Philippine Journalism.

The Imprenta was located on Calle Colon where most Cebu pioneer writers worked, as several printing presses were located nearby. 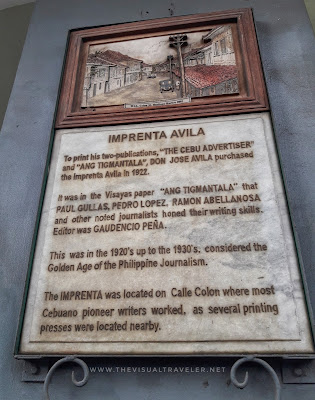 Built in 1920 this building owned by Quirino Rodriguez was the site of the famed Elite Bakery owned and operated by Emilio Osmena and his wife Mary Renner. Elite Bakery became one of the most patronized refreshment parlors by the elite few of Cebu. The original building though was destroyed during the World War II and the present building was rebuilt by the children of Quirino Rodriquez.

Also known as the Parian, is the oldest street in the Philippines. It was built by the Spaniards who arrived in Cebu in 1565 on the fleet composed of the vessels, San Pedro, San Pablo and San Juan under the command of Miguel Lopez de Legaspi. 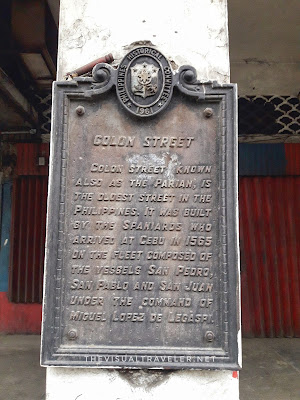 In one of your trips to downtown Cebu, you might want to take the time and see for yourself the forgotten history of Colon.
cebu History travel