A Noir State of Mind in Cebu's Colon Street

Posted by Margaux Camaya, The Visual Traveler May 19, 2017
It was a noir state of mind when I spent my Holy Week afternoon in Colon Street. It made me think of the nature of things. My unexpected fascination with Colon began on a sweltering Thursday afternoon.

About a month ago, my Facebook Newsfeed was filled with photos of people rushing from one church to another to complete the required 7 churches for Visita Iglesia. It was a hot Maundy Thursday afternoon and I also planned to do the pilgrimage but I ended up being distracted by the sight of the busiest street in Cebu being empty of the usual traffic of vehicles and folks.

Walking the street of Colon reminded me of being in Quiapo, Ermita or even Escolta. Colon was a composite of Manila, the real Manila.

The air is grimy and dusty. There is a muskiness in the air that gives it character. You know you're in the center of downtown Cebu by the look of the buildings; of the crowds of vendors, students, bystanders, and commuters either hustling to their next destination or just loitering around.
Being in Colon on any given day, you could imagine yourself starring in that Lino Brocka-helmed film, "Manila Sa Mga Kuko ng Liwanag". The grittiness of your surroundings, the blank expressions of people you encounter, the landscape that harkens days gone by; Colon is the perfect canvass for a Noiresque setting. Dilapidated buildings, cinema houses that time has forgotten, storefronts peddling wares at bargain prices, sidewalk vendors displacing pedestrians; overwhelm your senses. When transversing Colon on foot, you feel like you're running for your life. Don't look back or stop unless you want to be left behind.


I may sound melodramatic but that's actually what we advise folks when we go to these places. Don't bring your valuables, be alert, put your bags in front of you, go in groups, brisk walk, be mindful of the people around you; aren't these the things we say when we hear people going to Colon?
But it was a completely different story on that hot Thursday afternoon. When I alighted from the cab in front of Metro Gaisano in Colon, it was a whole new perspective for me. I could literally count the number of people on the street. Jeepneys and cars were scarce and if I wanted to, I could have done a pirouette on the middle of the street without being hit by a passing vehicle.


As I roamed the historic street of Colon, I told my friend that what's missing in us is the sense of civic pride. As the City of Cebu progressed and expanded its boundaries, citizens moved to the newer and less crowded parts of the Metropolis. Bringing with them their families and businesses. There was an attempt to revive Colon and connect it to its past but even that idea was abandoned. The Women International League even set-up Historical Markers throughout the thoroughfare commemorating the vitality and importance of Colon but eventually these were neglected and abandoned. 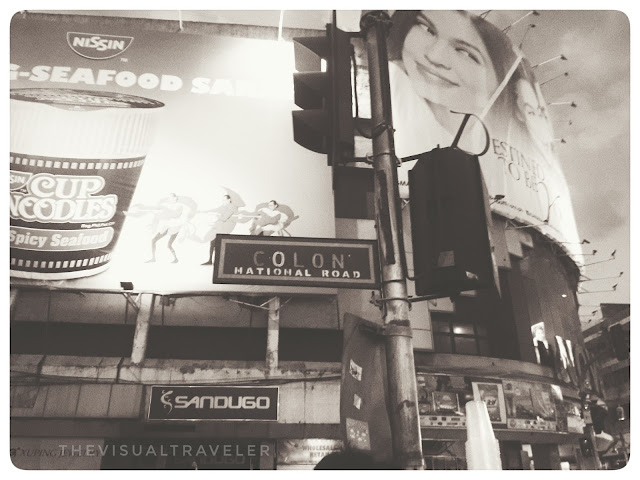 We, Filipinos, are so adaptable to change that we can easily shed or discard the old in exchange of the new. Is there room for sentiment? Yes, there should be. How can we clearly identify as Filipino if we forego our social and cultural past? In other countries, they embrace their Colonial past and use it to move forward. They do not destroy it. They use that as a guide or inspiration.


I know that progress and development are vital to the sustainability of a city or of a province but what I could not understand is the "I don't care" mindset that we have. It's never too late to change our outlook and attitude.

If Colon would be resurrected, picture it as the "Times Square" of Cebu. Neon lights and billboards, tourists taking their selfies and groufies, locals flocking to rehabilitated theaters, happy shoppers pursuing deals and discounts. Wouldn't that be a boost to the economy as well as to the morale of the community?


Some facts about Colon: a popular photo postcard taken during the early American Period (1900s-1910s) identified Colon as the oldest street in the Philippines; the street was named after Italian explorer, Cristobal Colon (Ferdinand Magellan and Miguel Lopez de Legazpi were fans); the entire length of the street is almost two kilometers from end to end; Colon became the center of commerce and trade since the conquest of Miguel Lopez de Legazpi in 1765; Lopez de Legazpi built the original town plan for Cebu.

Lastly, it has been a witness to hundreds of years of human history, culture and society.

Over the years, prominent personalities and families settled and lived along Colon street. Even schools and businesses were built here.


I'm glad that at least for Cebu, we dedicate a day or two in a year,  for our celebration of the  Philippine Heritage Month through Gabii Sa Kabilin which is held every last Friday of May.
I attended my first Gabii Sa Kabilin last year and I've been living in Cebu for a decade. It was a surreal experience for me. I could not have imagined the crowd of people who flocked to every site and event. You can feel the deluge of enthusiasm and excitement radiating from the participants. And that gives us hope for the future.

Love your perspective about Colon. It's really great when you try to reframe day to day scenes and get something surreal from it.

Funny how you elegantly described the foul smell in this streets which is really impossible to 'unsmell'.

It's also quite risky to take pictures in this part of town, which made me consider twice to write about a photo walk in these parts.

I also remembered way back that there was one local photographer who was able to take a shot in Colon without a sight of humans, it looked super cool, i guess he did it sometime around dawn.

With regards to Filipino apathy, i guess a big factor to consider is the level of poverty in our country. People don't care about civic pride or cultural past anymore. They're more concerned on where to find their next meal.

As for me, I would not transform Colon like that of Times Square in New York. Maybe it's just my stand against consumerism.

Thank you for reading my post and for your insightful thoughts. It would be nice to start a conversation about this topic.
May 31, 2017 at 1:41 PM

Jared said…
These photos are really well taken, with excellent composition especially when combined with the article (which itself is well written). I absolutely adore the way you elucidated the history of Colon and your personal analysis.

I am currently writing an article on LinkedIn and would like to use some of your photos for my article. Rest assured you will be credited as such and a link to this blog will be provided.

I would like to ask your permission to use your photos for the purposes of my article entitled, "Home Quarantine: A Medical Student's Perspective", as the empty streets during this enhanced community quarantine provides a stunning contrast to the usual bustle of activity of Colon St.

Jared said…
These photos are really well composed and the noir-style gives it an edge. The article itself is well written and very insightful. I absolutely adore the way you elucidated the history of the street and your other analyses as well as your insights.

I am currently writing an article on LinkedIn entitled, "Home Quarantine: A Medical Student's Perspective". I would like to ask your permission to use some of your images for the purposes of this article which perfectly contrasts the usual bustle of the area and the empty streets now that the city is in enhanced community quarantine. Rest assured I will give where credit is due and I will be providing a link to this article as well.

I humbly ask your permission to use some of your photographs for the purposes of my article.