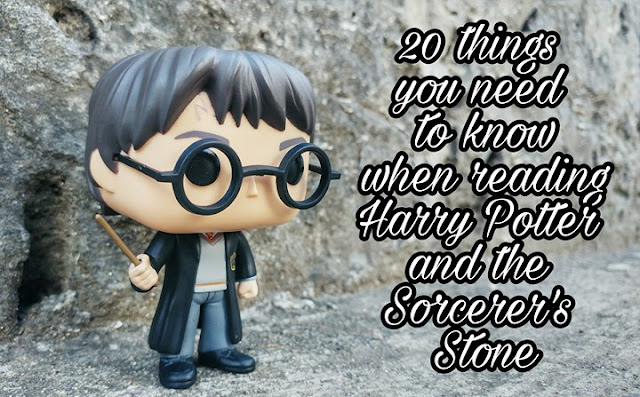 In honor of the twentieth year anniversary of the publication of Harry Potter and the Sorcerer's Stone (UK version: Philosopher's Stone), here are 20 things you need to know when reading or re-reading the book.

Please take note that if you haven't read the book or the rest of the books in the series for that matter, proceed with caution since this post is definitely full of spoilers.

If you have seen the movie but never read the book, reading Harry Potter and the Sorcerer's Stone is a whole new experience. It contains a lot of J.K. Rowling's signature nuances and subtlety. I've read it countless of times since I first came across it in 2000 but I still find new things to ponder on.

This is the shortest book among the seven that came out that tell the tale of the Boy who lived. Those who first read it in the 1990's or early 2000's have grown up together with the Hogwarts gang. If Harry, Ron, Hermione, and the rest of their friends were real people living in today's world, they would be in their 30's.

J.K Rowling left a trail of bread crumbs for her readers to connect the dots with. It's wonderful to discover how she ironed out the details as she wrote the later books.

Another reason why I came up with this post is to celebrate the launch of the Wizarding World Book Club of Pottermore. It's a community of readers who would explore together the themes, storylines, and characters of the Harry Potter books. Discussions will be held in Twitter forums (@wwbookclub and @pottermore). I signed up for it and excited to share my thoughts about the book series to other HP fans.

'Nuff introduction! I know how curious you are about the things you might have missed while reading the first book in the series written by J.K. Rowling.

The first time that Dumbledore uses his put-outer which looks like a silver cigarette case was in Chapter One. He used it to turn off the street lights on Privet Road. The next time the put-outer made an appearance it was now called a deluminator. Dumbledore bequeathed it to Ron Weasley.

Dumbledore gave the important task of bringing Harry to his Dursley relatives to Rubeus Hagrid. As Hagrid arrives in Privet Road, he mentions to Dumbledore and Professor McGonagall that he borrowed the motorbike that he was riding on from "young Sirius Black".

The rest of the missing puzzle in regards to Sirius Black would unfold in Prisoner of Azkaban (Book 3).

The Dursleys' go-to babysitter for Harry was their neighbor, Mrs. Arabella Figg, who was a known cat-lover. Unfortunately, in Chapter 2, she was unable to take care of Harry because of a broken leg. This led to him being brought along by the Dursleys to the Zoo.

Mrs. Figg would play an important role in Book 5 of the series, Harry Potter and the Order of the Phoenix. She was more than meets the eye.

As the Dudley celebrates his birthday at the Zoo, Harry becomes bored and unconsciously started talking to the Brazilian Boa Constrictor. And because of their erstwhile conversation, he let the snake escaped his glass enclosure.

This particular scene laid the foundation to the eventual connection between Voldemort and Harry. At this stage of the series, J.K. Rowling hasn't even mentioned the name of this special trait that can only be passed down to the heirs of Salazar Slytherin.

5. Rubeus Hagrid, The Keeper of the Keys

Hagrid has a tendency to blurt out things especially when he's excited or had too much to drink. He accidentally shared to Harry that he was expelled from Hogwarts in his third year and if it weren't for Dumbledore he wouldn't have been allowed to stay on as a Hogwarts employee.

The full story of Hagrid's expulsion from Hogwarts would play out in Chamber of Secrets (Book 2). And there's something special about his pink umbrella.

As Harry reviews his lists of needed supplies and books, there is a particular textbook that would draw your attention. Newt Scamander's Fantastic Beasts and Where to find them is prescribed reading for every Hogwarts student.

As what Mr. Ollivander boasts, he remembers every wand that he ever sold and he tells Harry about James Potter's wand.

"Your father, on the other hand, favored a mahogany wand. Eleven inches. Pliable. A little more power and excellent for transfiguration. Well, I say your father favored it ---- it's really the wand that chooses the wizard, of course."

Take note of the word transfiguration.

We would also learn from Mr. Ollivander that the feathers for both Voldemort's and Harry's wands came from the same Phoenix. In Chamber of Secrets, we would find out who this Phoenix is.

From Goblet of Fire to Deathly Hallows, this premise would explain why their inner cores were similar and that one wand could not defeat the other wand.

During their ride on the Hogwarts Express, Harry got a Dumbledore card in one of the chocolate frogs that he unwrapped. On its description, it stated that Dumbledore "is particularly famous for his defeat of the dark wizard Grindelwald in 1945".

When Ron and Harry first met Hermione onboard the train, she shared that Harry is mentioned in the following books: Modern Magical History and The Rise and Fall of the Dark Arts and Great Wizarding Events of the Twentieth Century.

First-year students are brought to Hogwarts castle on a boat through the Black Lake while Upperclassmen ride in carriages.

"And the fleet of little boats moved off all at once, gliding across the lake, which was as smooth as glass. Everyone was silent, staring up at the great castle overhead. It towered over them as they sailed nearer and nearer to the cliff on which it stood."

Severus Snape is the professor you'd like to hate especially when he started peppering Harry with questions. One of the potions that he referred to was the Draught of Living Death which Professor Slughorn asked his Advance Potion-Making class to make in the Half-Blood Prince (Book 6).

Another one of Snape's loaded question to Harry was all about the Bezoar stone; which is from the stomach of a goat and can be used to counter certain poisons. It would play a prominent role in the Half-Blood Prince when Harry saved Ron's life. 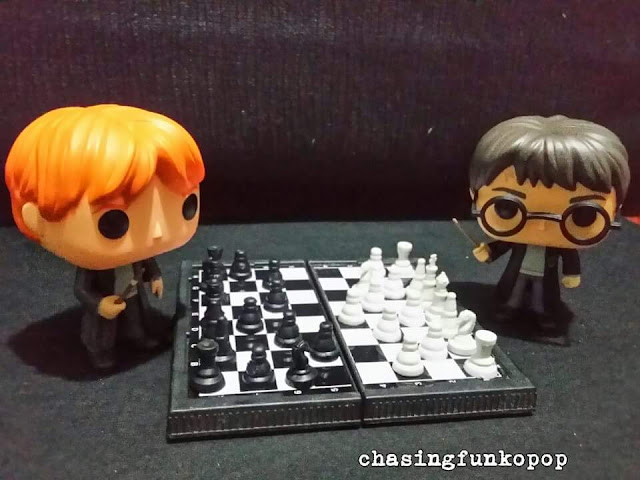 Harry was the youngest Seeker in the Gryffindor Quidditch Team and during his first game, he caught the Golden Snitch in an unusual manner.

"Harry was speeding toward the ground when the crowd saw him clap his hand to his mouth as though he was about to be sick --- he hit the field on all fours --- coughed --- and something gold fell into his hand."

It would also play a prominent role in Book 7, Harry Potter and the Deathly Gallows.

When Harry mysteriously received the invisibility cloak there was a note that accompanied it.

"Your father left this in my possession before he died. It is time it was returned to you. Use it well. A very Merry Christmas to you."

Later on in the series, Dumbledore expressed regret that he had the cloak when Harry's parents were killed by Voldemort. I won't say anything else.

"It looked like an unused classroom. The dark shapes of desks and chairs were piled against the walls, and there was an upturned wastebasket ---".

"Filch knew the secret passageways of the school better than anyone (except perhaps the Weasley twins) and could pop up as suddenly as any of the ghosts."

The big reveal about how the Weasley Twins know all the ins and outs of the Hogwarts Castle will be explained in Book Three (The Prisoner of Azkaban).

The first and last time the Hogwarts School Song was ever mentioned (in the entire series) was in Chapter Seven (The Sorting Hat).

You can sing it with any tune that you want. The Weasley Twins sang it using a very slow funeral march.


"Hogwarts, Hogwarts,
Hoggy Wart Hogwarts,
Teach us something please,
Whether we be old and bald
Or young with scabby knees,
Our heads could do with filling
With some interesting stuff,
For now they're bare and full of air,
Dead flies and bits of fluff,
So teach us things worth knowing,
Bring back what we've forgot,
Just do your best, we'll do the rest,
And learn until our brains all rot."

18. A Change in Perspective

I'm not sure what made J.K. Rowling change the real reason why Severus Snape was protecting Harry. In Sorcerer's Stone, she started with the tale how Snape's life was saved by James Potter but as we all know in the later books, it was all about Lily.

"Well, they did rather detest each other. Not unlike yourself and Mr. Malfoy. And then, your father did something Snape could never forgive."

"He saved his life."

"Yes..." said Dumbledore dreamily. "Funny, the way people's minds work, isn't it? Professor Snape couldn't bear being in your father's debt...I do believe he worked so hard to protect you this year because he felt that would make him and your father even. Then he could go back to hating your father's memory in peace..."

19. Of photographs and memories

As a get-well-soon gift for Harry after his standoff with Professor Quirrell and Voldemort, Hagrid gave him a photo album full of photos of James and Lily Potter.

"It seemed to be a handsome, leather-covered book. Harry opened it curiously. It was full of wizard photographs. Smiling and waving at him from every page were his mother and father. "

These photos will appear again in Book 5, The Order of Phoenix.

I've always thought of Neville Longbottom as the fourth musketeer. Ingenious hints of his importance were laid by J.K. Rowling as early as Sorcerer's Stone.

Have I missed anything? Please feel free to share your thoughts and ideas.

Let's have a meaningful discussion about the book series.
books Entertainment harry potter