A Visual Tour of Philippine Lapidas and Tombstones

When I was still living in Metro Manila, it was a yearly tradition for us to go to Pampanga and pay our respect to our paternal ancestors. The last time I spent an All Saints' Day or All Souls' Day in Pampanga was more than a decade ago.

There are major three events in a Filipino Christian's year: Lent, Christmas, and Undas (All Saints' Day)

Undas is the Filipinized term for the Spanish word, Honras. And Filipinos make it a point to meet with relatives during this holiday.

I remember when I was younger, before the advent internet and cellphones, one of the pastimes that chidren do in cemeteries during Undas was to gather the candle drippings and make the biggest ball of wax. You'll see youngsters going to one tomb to another gently removing the wax drippings from lighted candles.

It wasn't my thing because I didn't like being burnt and I was scared of being lost amongst the crowds. When I became a little older what I did instead was to read the inscription on the gravestones. I was also fascinated by the ornate tombstones and mausoleums that were built by loved ones for their dearly departed.

Before the more modern memorial cemetery opened in my dad's hometown, we used to visit the public cemetery since it was were my great-grandparents were buried. I'm guessing it was also a Catholic one since it was just a few meters away from the main church of St. Peter's.

I've been to a few churches in Luzon and the Visayas but I've never seen a graveyard within church grounds. The centuries-old San Agustin church in Intramuros has a crypt. The Nagcarlan cemetery in Laguna is famous for its crypt but this is located a few kilometers away from the parish church of San Bartolome Apostol.

In Spanish Colonial town planning, parish churches together with the government were part of the town plaza which were designed to be the focal point of peoples' lives.

During the course of researching for this article, I've read that in the 19th century, cemeteries were relocated to the outskirts of the town proper. Folks were becoming more aware of the importance of sanitation.

We honor our dead by memorializing them.

In Jose Rizal's Noli Me Tangere, the first thing that Crisostomo Ibarra did upon arriving in San Diego was to look for his father's grave and pay homage. When he learned from the hapless gravedigger that when he was tasked by the cura parroco to transfer the body to the Chinese cemetery, he had a hard time transporting it because of the heavy rains. Thus, he decided to throw the remains in the river. Ibarra then mistakenly thought it was Padre Salvi who ordered the exhumation, he unwittingly attacked the parish priest and created his own enemy.

Most headstones that I've observed are utilitarian, listing only the name, date of birth, and date of death.

Some markers will have quotations, prayers, or epitaphs. Depending on the size of the tombstone, the engraving will either be condensed or lengthy.

When our high school music teacher died, my classmates who were able to visit his grave shared that his marker included a line or two from the song, Corner of the Sky, which was from the Broadway musical Pippin.

Inside Santa Catalina de Alejandria in Carcar, Cebu there are beautifully written memorials in Cebuano. You can feel the sadness and longing of those who were left behind.

Gravestone materials also differ. There are marble ones, some are made of stone, and even wooden markers were created.

Various sculpted figures and symbols adorn the tomb as well as the memorial markers. Each figure has a meaning to the dead or to the living.

Philippine cemeteries that can be traced to the Spanish and American Colonial periods are great places to visit when one is interested in architecture, art, history, photography and design. Our cemeteries are historically  and aesthetically comparable to New Orleans and Paris.

We can even follow their lead in promoting tourism via cemetery tours. Taphophiles or tomb tourists are in the rise in the Philippines.

The ABCs of the Philippine Lapida

A peculiar interest of mine when reading the gravestones are deciphering what those 3 letters normally found on top of the inscriptions mean.

We can pinpoint the location and era of a tomb because of these 3 letters. 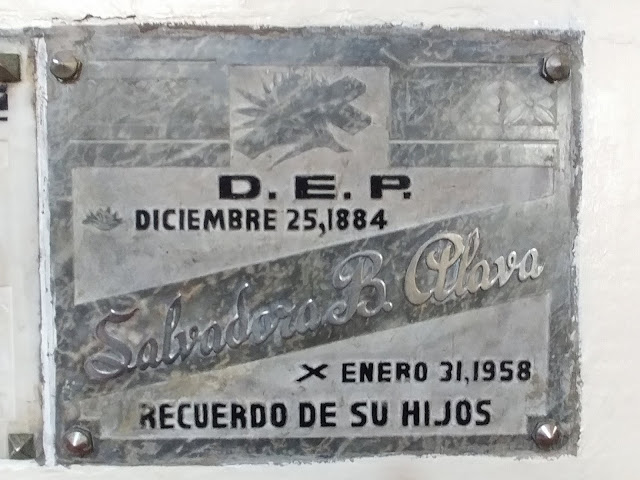 In San Agustin church, we can see a lot of R.I.P., D.E.P.,  D.O.M., and E.P.D. Being one of the oldest church structures in the Philippines, we can safely assume that those have Spanish or Latin meanings.

The following are variations of Rest in Peace in different languages.

D.O.M is a Benedictine phrase in Latin. Deo Optimo Maximo translates to To God, most good, most great or To the greatest and best God.

PAX is the Latin word for peace. In Cebu, I also found a marker that has B.M.M which could stand for the Latin phrase Beatae Memoria or Of blessed Memory.

In Luzon, you'll find S.L.N. which is Tagalog for Sumalangit Nawa. I've seen these lapidas in Laguna and Pampanga.

It would be a great experience to explore other cemeteries in the Philippines to see the different ways we honor and remember our dead. I would add these places to my travel bucket list.