Posted by Margaux Camaya, The Visual Traveler April 13, 2016
Have you read a John Grisham novel? Are you a fan? If you haven't read any of his novels, here's a list that can help you decide on which book to read first.

The first John Grisham book that I ever read was “The Pelican Brief” and I definitely got hooked with his storyline. Truthfully, there were times that I had to read some passages in order for me to understand the legal terms.

I couldn't use the Internet to do my own research since this was before the Web ever became public. Yes, that's how old I am.

John Grisham tackles his various characters and the complex world of the U.S. legal system in a way that makes it easy for his readers to relate with. It borders on what is real and sometimes the unthinkable.

His usual formula contains the main protagonist who always seems like the underdog but eventually transforms himself into a crusader or maverick in order to save the day. His thrillers definitely add excitement to the world of the legal profession.

John Grisham was one of the bestselling authors of the 1990s. Most of his novels were adapted into movies. I only included his fictional legal novels in my consideration.

Here are the 5 must-read books that will not disappoint. And make sure that you have these in your book collection.

1. A Time to Kill – I admit that I watched the movie first before picking up the book. The movie was an emotional one for me and I just couldn’t bring myself to go through the same emotions that I felt while watching the movie.

This being Grisham’s first book, he created the world that he will continue to go back to. You can really see the transformation of Jake Brigance while going through the trial.

For me, the book was superior to the movie since it added depth and drama to the characters. But I did like how the movie presented Jake's closing argument. That was the deal breaker. That particular courtroom scene (both in the novel and movie) clearly defined how the audience will feel about the story.

2. The Confession – What would you do if you were wrongly accused and counting the days to your state execution when suddenly someone confesses to the crime you allegedly committed?

This novel is heartbreaking. The only thing that went through my mind is, please give them more time! It showed me a reality that happens often than not and that it not only affects the victim or the accused but also their families and acquaintances.

I couldn't stop crying while reading this. This novel was based on an actual case that John Grisham also published but as a Non-Fiction book.

3. The Rainmaker – The novel gives us a struggling and idealistic young lawyer, Rudy Baylor, who takes on a powerful insurance company with seasoned corporate lawyers. Compared to Grisham's other novels during this time period, The Rainmaker's story is considered lightweight. The book's plot gently connects Rudy’s personal and professional lives.

I also love the idea of having a sidekick which normally doesn't happen in a Grisham novel. It’s an entertaining read. A little small scale compared to other Grisham stories.

If you've seen the underrated Francis Ford Coppola-helmed movie version starring Matt Damon, the book is much better. I admit that I enjoyed the movie but read the book first. I cried several times while reading this.

4. The Litigators – I love reading Grisham’s courtroom scenes because you can actually imagine yourself being in the same room as the characters. I also like how the book's protagonists encounter mundane or trivial things that turn out to be the key or solution to their dilemmas.

Only Grisham can weave that storyteller magic in the way he incorporates serious-minded characters as well as zany and kooky ones.

5. The Firm – This is one suspenseful book! My heart was pounding a lot when reading this book. It has that plot twist that made me wonder if I’m reading a legal thriller or a mob story. I like the cloak and dagger shenanigans that added to weight to the story.

I'm actually waiting for Grisham to create a book sequel for this one. It didn't hurt that the Tom Cruise movie also fueled folks to buy more John Grisham novels. And in the 2010s, there was even a TV series based on the novel. It continues where the story left off.

I really like how Grisham’s characters pick their fights. They challenge the meanest, most powerful and more experienced antagonists; run circles around them and win their battles.

The suspense never stops in this book especially during those last few chapters, I wanted to slow down my reading for it to last but I also wanted to learn how everything was connected. My emotions were a constant tug-of-war.

This book is a great example of the David versus Goliath theme. It's way better than the movie version. It seems that tobacco companies are more effective villains than gun companies. 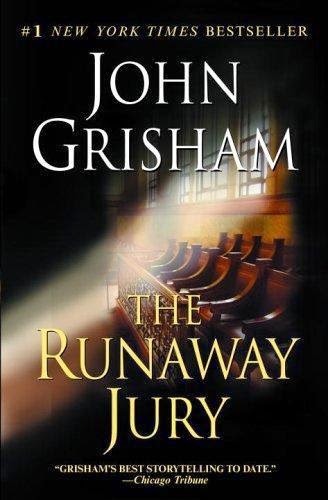 Katherine said…
I think I've read all of these, but it's been a long time that I can't remember. My favorite among John Grisham's book isn't a legal thriller -- A Painted House. It's a beautiful family story in a rural setting. The Runaway Jury comes in second. The rest I've enjoyed but have already forgotten the details. :)
June 22, 2016 at 3:08 PM

Roselle CT said…
I love reading John Grisham books and the only one I haven't read from your list is The Litigators. A Time To Kill is my favorite and I agree, the book is better than the movie. Well, most of the time I really find the books better than the movies :)
June 22, 2016 at 3:48 PM