Posted by Margaux Camaya, The Visual Traveler September 07, 2016
Would you believe me if I tell you that this little piggy is not real lechon (roasted pig) but made out of bread?

This is the best looking lechon bread I've ever seen and it's made in Cebu.

Cebu is best known for it's version of Lechon or Roasted Pig. Every traveler who visits the Queen City of the South has to try out the salty, crispy and aromatic pork delicacy. 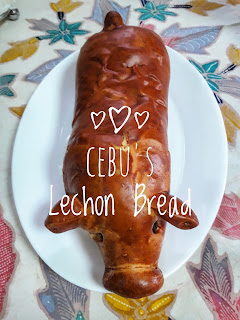 Lechon is so popular that one bakery in Cebu pioneered the Lechon bread. A loaf of bread that is sculptured to look like a lechon de leche or small roasted pig.

I've always wanted to buy one because it's so cute. A few weeks ago, I had a reason to do so since I wanted to surprise my one-year-old nephew who happens to love eating bread. I decided to buy 2 lechon breads to bring home to Manila.

I asked my friend to accompany me to Gaisano Country Mall in Banilad because that was where I originally saw the novelty item. I also know that Gaisano South in Colon also sells them at their bakery. But since Banilad is much closer to where I live, that's where I bought the bread.

When I saw the bread, I said to my friend how realistic they look like. It even had a tail and hooves. The head was life-like with raisins for eyes and in it's snout. It's one authentic looking pig bred. 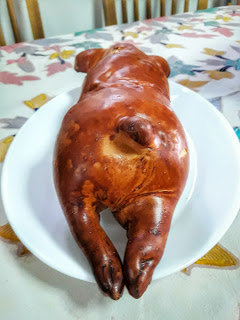 Over the years of selling them, Metro Bakery has perfected the art of making the lechon bread. The bread actually tasted good. It tasted like monay bread.

I can just imagine what the Airport Security guy was thinking when he saw it in the luggage x-ray machine. I was extremely careful with them since I wanted to ensure they would be in excellent condition to have that wow factor.

When I showed it to my nephew, he got a little scared and didn't want to touch it. But for our other guests, the roasted pig bread was a hit. They were a little disappointed since they thought they were going to eat some pork goodness. 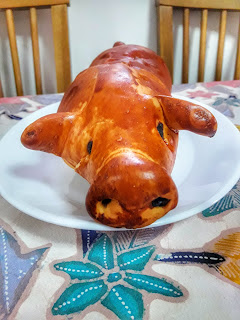 Want to liven up a party or pot luck? Add this Lechon bread to your table offerings.
cebu food