Posted by Margaux Camaya, The Visual Traveler September 11, 2016
What would you do if you had a chance to meet your favorite author? Would you grab the bull by its horns and make it possible? I did and I couldn't stop gushing about it even after a week. On a September Saturday afternoon, I was fangirling with the Filipino Hugot Historian, Professor Ambeth Ocampo. 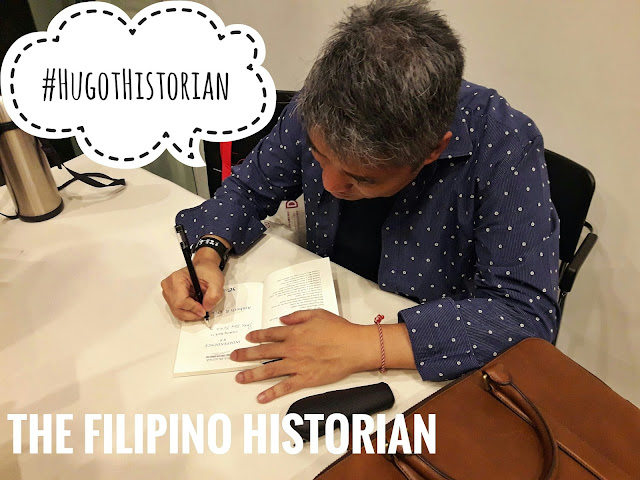 Sometime in July, I was going through my Facebook feed when I saw the announcement for this year's History Comes Alive series of Professor Ambeth Ocampo at the Ayala Museum. I've always wanted to attend his lecture sessions but living in Cebu makes it a little difficult.

For this year, my scheduled trip to Manila coincided with his September lecture. I was brimming with excitement when I contacted Ayala Museum via email on how to reserve a ticket. Their response time and instructions are admirable.

I paid via bank deposit through a local bank. I sent a picture of the bank slip and all I had to do was show up on the day of the event and provide my name when I register.

One thing that I would recommend for those planning to attend Professor Ocampo's lectures is to reserve a seat hours before the event starts in order for you to get choice seats. His sessions are so popular that it always gets a standing-room-only crowd by the time the lecture begins. As an added bonus, you also get a free copy of one of his Looking Back serial compilations.

On the day of the lecture, I went through my Ambeth Ocampo book collection and picked books for him to sign. I wanted him to sign all of my books but I know it would be impossible considering that most of my collection is in Cebu.

I decided to bring his Doctoral Thesis book, 'Makamisa' which was still in my Manila book collection. 'Makamisa' is about his discovery of Rizal's third novel written in Tagalog.

I was choosing between this book and my first copy of 'Rizal without the Overcoat' but ended up bringing 'Makamisa' to the event.

It was one of those perfect afternoons. The weather cooperated and the entire day was filled with Sunshine. On my way to Makati, I didn't encounter heavy traffic. The fates were on my side.

The September lecture was all about Ferdinand Marcos and Martial Law. As per Ambeth Ocampo, this particular era isn't his expertise but because he was able to get hold of President Marcos' personal diaries from 1969-1983, he is starting to explore this Historical period. He shared a lot of tidbits gathered from the diaries and conversations that he had with Marcos intimates.

There were the Midnight sessions that Marcos had with Benigno "Ninoy" Aquino. He, Marcos, respected Ninoy's intellect and political savviness.

Another fact about President Marcos was his belief that everything that he did leading to his decision of declaring Martial Law had the divine grace of God.

And the eye-opener of them all was that as early as 1970, he was already formulating and planning on how he can constitutionally declare Martial Law.


When attending lectures similar to this, you just need to be open-minded. Historians have their own prejudices and biases. Their impressions and interpretation might differ from one another. But it doesn't mean that they are inaccurate. Their ideas and logic come from years of research and study. It's hard to be a Historian because you have to make sure your research materials are authentic, reliable and most of the time from primary sources.

If you've read Mr.Ocampo's books, then you will feel comfortable during his lectures. It has an easy flow to it. It's similar to having a gossip session with your friends. No pressure to know memorize dates and facts. No Historical jargon used, the language that he favors is suitable to the 21st Century audience.

After hearing him up-close and personal, I now understand why his College classes are always jampacked.

Professor Ocampo can be likened to a rockstar --- he's popular and attuned to the needs of his audience.


After his talk, he has the book-signing. It was also a chance for his fans to have some small talk with him. He was accommodating to photo requests as well.

It was a Saturday afternoon well spent. And I hope I will be able to have the privilege of spending another one with him in the future. I do hope that Ayala Museum would mount Professor Ambeth Ocampo's lecture series in Cebu. I know that a lot of his readers and fans would love to attend.

He still has two History Comes Alive series remaining for this year. On October 5, it would be Food in Philippine History and the November 26th lecture will be about Gregorio del Pilar.

Check out the poster for more details: 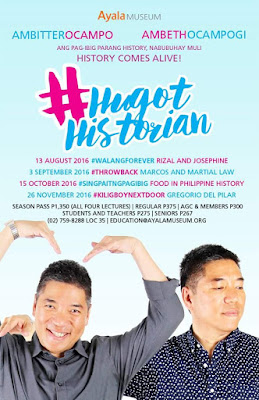