Posted by Margaux Camaya, The Visual Traveler September 10, 2017
Hollywood as with all other businesses enjoy a dash of nepotism in its ranks. Talent can be developed but the passion for it surely runs in the blood for these six actors. These actors are part of families who have been in show business for years. You can say that they've inherited the family business. 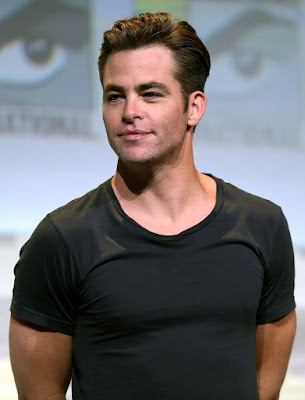 We'll be focusing on actors who have starred in movies and TV shows. Another criteria that we've looked into is that these modern-day actors should either be the third or fourth generation in their family to get the acting bug.

Not bad for someone who started out as a romantic foil to Anne Hathaway in The Princess Diaries 2: Royal Engagement.

His maternal grandmother, Anne Gwynne, was one of the original Scream Queens of the 1940s. His mother, Gwynne Gilford was also an actor as well as his father Robert Pine. His parents mostly starred in popular 1970s TV shows.

Named after her maternal grandmother, Oona O'Neill Chaplin, who was the fourth and last wife of the great comedian Charlie Chaplin.

Known more as a Spanish actress, Oona Chaplin was cast as Talisa Maegyr in HBO's Game of Thrones. She also starred in a film version of Nicholas Sparks' novel, The Longest Ride.

British-American Jack Huston is a 4th generation member of his family to be involved in show business.

His great-grandfather was Walter Huston who won an Academy Award for Best Supporting Actor in a film directed by John Huston; Walter's son and Jack's grandfather.

His aunt, Angelica, also won an Academy Award for Best Supporting Actress in a film directed by her father, John.

Jack Huston is best known for playing Richard Harrow in HBO's Boardwalk Empire. He has also starred in American Hustle, Pride and Prejudice and Zombies, The Longest Ride, and Ben-Hur.

Sensuality and sex appeal must run in Dakota's genes being the offspring of "Working Girl"  Melanie Griffith and "Miami Vice" Don Johnson. Starring as Anastasia Steele in the Fifty Shades movie trilogy must have been written in the stars for her.

Another thing that Dakota has in common with her mom, Melanie, both of them became Miss Golden Globe (1975 and 2006 respectively). Melanie is the daughter of Tippi Hedren who was one of Alfred Hitchcock's Muses. Ms. Hedren starred in "The Birds" and "Marnie". 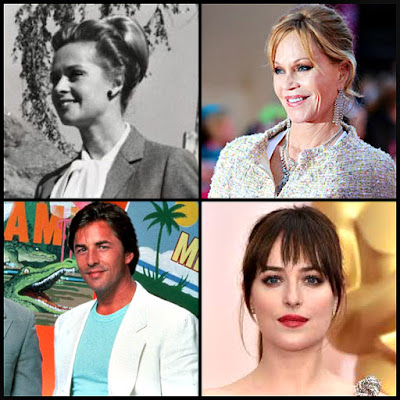 Her first substantial acting gig was playing a reporter in the third installment of Francis Ford Coppola's Opus, The Godfather, Bridget is the daughter of "Easy Rider" Peter Fonda. She starred in several 1900s movies such as "Single White Female" and "Singles".

Drew Barrymore comes from a long line of classically-trained Theater actors. The Barrymores have been in the acting business since the late 19th Century.

Drew's grandfather, John, was known as "The Great Profile" and reached his fame in the 1930s. Her father, John Jr., starred in B movies during the 1950s.

John's siblings, Lionel and Ethel, were both Academy Award winners and also made their mark both on stage and on screen.

Drew has endeared herself to moviegoers since she appeared in the 1981 cult classic E.T.

The newest addition to Hollywood royalty, Billie Lourd is the only daughter of actress and writer Carrie Fisher. She can be seen in the following TV series, Scream Queens and American Horror Story: Cult.

Carrie was the daughter of 1950s star Debbie Reynolds and crooner Eddie Fisher.

Billie is also related to actress Joely Fisher who is the daughter of Eddie Fisher from his marriage to singer Connie Stevens.

He may not be a movie star but Jordan Bridges is continuing the family tradition of acting in TV shows. He recently had a supporting role in TNT's Rizzoli & Isles.

Lloyd, the patriarch of the Bridges family, became famous because of his 1950s TV show, Sea Hunt. He also appeared in several screwball comedies like Airplane! and Hotshots! Part Deux.

Know any more actors who belong to Hollywood Royalty?

Want to read more about show biz families? Click this link to read my post about Oscar-winning families: The Oscars, It's a Family Affair!
Entertainment