Posted by Margaux Camaya, The Visual Traveler October 28, 2016
The Annual Cebuano Festival of Sinulog celebrates the Miraculous Holy Child of Jesus. The Holy icon that is found in the Basilica Del Santo Nino is almost 500 years old. Pilgrims and tourists flock to the Basilica to pray and visit. 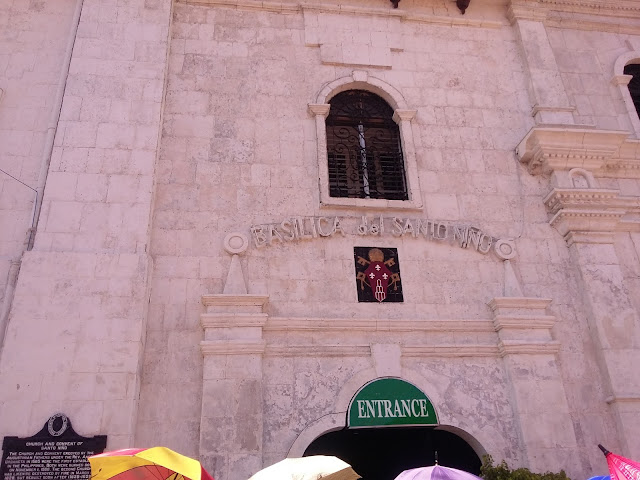 The Basilica is one of Cebu’s treasured Historical Landmarks. There is a small museum located onsite that you should also include in your Itinerary.

The Minor Basilica of the Holy Child of Jesus has a storied past. It is the first Roman Catholic Church built in the Philippines. It traces its roots to the first Spanish explorers who landed in the Island of Cebu.


History
In 1521, Ferdinand Magellan gifted a statue of the Holy Child of Jesus to the wife of local Chieftain, Raja Humabon. It was lost to History when the Magellan forces were ousted from the island. 44 years later when Miguel Lopez de Legazpi’s expedition arrived in Cebu, a soldier found the Holy Icon buried in a gravesite. Fray Andres Urdaneta and Fray Diego Herrera, both Augustinians Friars founded the present church on the site where the Santo Nino was located.

Architecture
There have been several incarnations of the Basilica since it was originally built in 1565. The present-day Church is based on the style, Earthquake Baroque which was constructed out of stone to minimize the effects of earthquakes. The convent and library were added a few years after the completion of the church in 1570.

As with the layout of other Spanish Augustinian churches in the Philippines, the Basilica has a small courtyard between the main church and the old convent. It’s a nice place to rest and appreciate the centuries-old architecture.

It's design includes a garden with stone benches and a terrace that overlooks the courtyard.

The hallways surrounding the courtyard boasts of several paintings depicting the arrival of the Spaniards and the start of the evangelization of the Philippines.

One of the corridors lead to the viewing room of the Santo Niño.

Belfry Reconstruction
In 2013, the Basilica suffered major damages when the centuries-old Belfry was destroyed by a magnitude 7.2 earthquake. Some of the frescoes and the church’s façade were affected as well. It took three years for the repairs and restoration to be completed.

There are no shortage of people when you go to the Santo Nino Church. It is advisable to wear comfortable clothes but avoid wearing shorts or sleeveless tops when entering the Church vicinity. Also be mindful of the crowds especially when attending Masses or during Religious Holidays as these attracts huge flocks of devotees.

Location
The Basilica complex is part of the Plaza Sugbo where you can also find the Cebu City Hall and Magellan’s Cross. It is one of the favorite destinations when you do a Historical Tour of Cebu City.