Dick Francis, My Guru To The Sports of Kings & Queens

The first time I've read a Dick Francis crime novel, I just couldn't put the book down until I've reached the last page...I got hooked after that. I immediately looked for the other books that he wrote and became obsessed with reading them.

Who would have thought that the world of horse racing would be the chosen backdrop of Champion Jockey-turned-writer, Dick Francis?! Whether it's in England or South Africa, Australia or New Zealand or even in the USA...you'll be able to find a Dick Francis Protagonist. 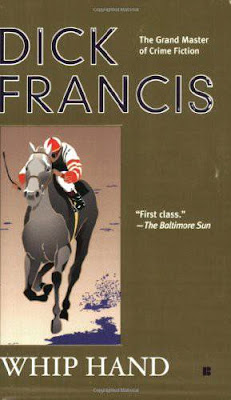 Even his novels which were written 30 or 40 years ago are still relevant in today's world. I find myself learning new things when reading his novels. I don't specifically doubt what he writes, unlike when reading Dan Brown's novels, you can't separate fact from fiction. The reason for this is the sense of the reality of his characters and the circumstances that they find themselves in.

His characters have a sense of practicality and realism which also shows in his storylines. He deals with heartache, revenge, betrayal, death, hunger (for the jockey heroes), loss in a simple and straightforward manner. Not too much drama or hysterical scenes.

With his novel, "Proof", I was able to appreciate the different kinds of Scotch whisky and how to distill them. In "Hot Money", Ian Pembroke's father (Malcolm) was a financier and a gold expert. His novel, "Comeback", deals with a toxin found in pufferfish and is used as a murder weapon. His book, "Straight", deals with the diamond trade. In "The Edge", his readers are taken to a Great Transcontinental Mystery Race Train in Canada.

I've always pictured his heroes as the James Bond of the racing world. They were resilient in the face of danger, intelligent, had a strength of character as well as will power. They were debonair and most often than not, fearless. And in times, they're faced with an ala-Rashomon moment of decision.

His male protagonists are not limited to a jockey's role. They differ from one story to another, There was a diplomat, an action star, a painter, a glass blower, a banker, a private investigator, a pilot, a restaurant owner even a lawyer.

His heroes are not perfect and at times, they're flawed similarly to any human being on the planet.

Women often than not do not play an important role to his characters. They mold the male protagonist's character as well as behavior. This can be considered ironic since his wife, Mary, was a major contributor to his writings. There is even a rumor circulating around that the real writer of the novels was Mary and not him. In any case, it was a true partnership between them. She was his literary partner.

Filipinos haven't truly discovered his books yet. Horse racing might not be a popular sport in the Philippines, but we do have a lot of crime/mystery enthusiasts. I just wish that they can decide to pick up one of his novels.

How unfortunate that he died a couple of years ago and this created a void in my reading selection. But it hasn't stopped me from re-reading his past works which I often do. I'm happy that his son, Felix Francis, is continuing his father's legacy.

Discover Dick Francis and be entertained by his storylines, his characters and the way that he integrates his passion for racing and writing.