Posted by Margaux Camaya, The Visual Traveler April 17, 2014
In 2012, when everything Abraham Lincoln was all the rage, I tried reading Doris Kearns Goodwin's "Team of Rivals: The Political Genius of Abraham Lincoln" on which the Oscar-nominated movie "Lincoln" was based on. I ended up just reading the first few pages of Chapter 1. I find Lincoln and the American Civil War fascinating but maybe it wasn’t the right time to read that particular book. 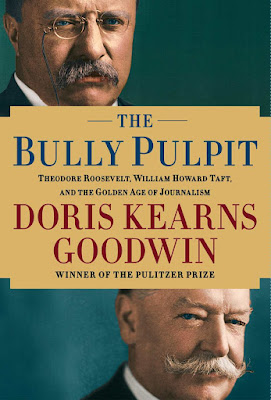 Goodwin’s new book, ‘The Bully Pulpit”, focuses on the lives of Presidents Theodore Roosevelt and William Howard Taft. It also takes us to the rise of Progressive Journalism. I finished this book in about 2 days.

One of my favorite U.S. Presidents is Teddy Roosevelt. It may be because of the legend surrounding him and the different stories told about him and his family.

What’s not to love about Teddy Roosevelt!? He had a boisterous and loving family, he had an adventurous career as a rancher, a volunteer soldier and politician. He won the Nobel peace prize, wrote books, and also became an explorer, naturalist, and environmentalist. He pushed for the construction of the Panama Canal, he had his face carved on Mt. Rushmore plus the all-time favorite toy, the teddy bear, was named after him.

Teddy Roosevelt was larger than life!

For us, Filipinos, Teddy Roosevelt, and William H. Taft played a very significant role in our History. Taft was named Governor-General of the Philippines during the American Occupation. He quite enjoyed his stay in the Philippines. He endeared himself to the Filipinos and wanted to do more even after his tenure as Governor-General was done. The main avenue where my university is located is named after Taft. It’s a busy and important thoroughfare. You can still find a lot of places and schools named after Taft. There is a high school named Roosevelt but I think this was in honor of Roosevelt's son, Theodore Jr. (Theodore III) who became Governor-General of the Philippines during the 1930s.

It’s ironic how these 2 presidents were best of friends that suddenly became the worst of enemies because of politics and agenda. It took almost a decade before they were able to patch up their differences.

The book is not limited to the 2 presidents but also devoted time to the rise of the progressive era of journalism. The late 19th and early 20th centuries were the rise of social consciousness in journalism. Sam S. McClure, Ida M. Tarbell, Lincoln Steffens, Upton Sinclair and Ray Stannard Baker were some of the new breeds of journalists who made inroads in opening the eyes of the American public to the true state of affairs in U.S. society through investigative reporting.

Teddy Roosevelt and these “muckrakers” had a healthy and successful relationship especially during the period of his Ant-Trust battles with Big Business. They provided him arsenal for his policies and speeches.


The Bully Pulpit is a must-read for those who love History. It’s an easy read and not that too daunting. This book resonated with me since it presented personalities and topics that I find stimulating. I hope that someone would make a movie out of this book as well.
books History