Posted by Margaux Camaya, The Visual Traveler April 13, 2014
"My usual fate. Disaster to friends as well as to myself."

I always associated hemophilia with the last Russian Tsar Nicholas II and his family. Hemophilia changed Russian History as well as World History because of the decisions that were made to save Tsarevich Alexei from this illness.

I was curious about the disease's connection to the Russian family; how it manifested in that particular royal line. I was doubly curious when I found out that hemophilia was an inherited disease that Alexei inherited from his mother, Empress Alexandra who inherited the gene from her mother, Princess Alice of the United Kingdom, Queen Victoria's second eldest daughter.

And that Queen Victoria in turn lost her own son, Prince Leopold Duke of Albany, to the disease.

This is the story of how 19th century Medicine and society coped with a fatal disease such as hemophilia and the kind of relationship that Prince Leopold had with his mother, The Queen. 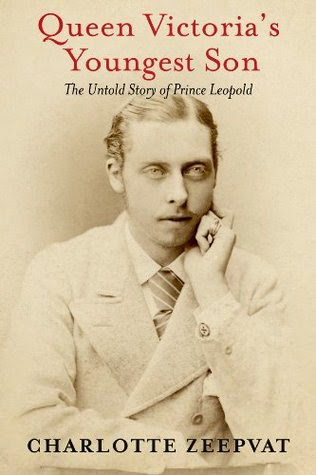 Queen Victoria and her family were prolific letter-writers and tons of data and information can be gathered by going through their correspondence. There were also published and unpublished recollections from significant players who were privy to the British Royal Family. Majority of the book material was based on research done through the letters and recollections.

Hemophilia was an inherited disease normally it can be passed on from an infected mother to her son or a hemophiliac father to his daughter.

Hemophilia wasn't limited to the Russian Royal descendant of Queen Victoria but it also manifested to the German (Hesse and Rhine) and Spanish descendants as well. Prince Leopold's own grandson, Rupert Cambridge Viscount Trematon, through his daughter, Princess Alice, died prematurely because he had hemophilia (internal hemorrhage due to a car crash).

I came across this biography by accident. I was searching for books about the last of the Romanovs when I read that Charlotte Zeepvat also wrote a biography about Prince Leopold. There aren't a lot of biographies written about the youngest son of Queen Victoria.

Prince Leopold was the first in his family to have inherited the hemophilia disease. Subsequently, his life was the compass that guided other royal family members on how to cope with the disease. He died when he was only 30 years old and this was unusual since those who had the disease rarely reach adulthood.

When Prince Leopold George Duncan Albert was born, his mother the Queen, was the first royal and queen to be sedated by anesthesia particularly chloroform which was a medical marvel at that time. He was the 8th child and 4th son of Prince Albert and Queen Victoria. He was named after his grand-uncle Leopold and as to create affinity with the Scottish part of the realm, he was received the name Duncan.

Prince Leopold had a very rocky and challenging relationship with Queen Victoria because of the Queen's fear of his early death and made she might also have felt guilty knowing that the disease could have been passed on to him through her. The Queen tried to limit Prince Leopold's activities as well as control the course of his life.

She was grooming him to be her lifelong companion but he was struggling on his own to led the life he always wanted to have and not let hemophilia dictate it for him.

Even with the hindrances that surrounded him, Prince Leopold had a very intellectual and active journey to life. He was the only Royal son to study at Oxford university. He created friendships with the leading Victorian-era literary set especially Lord Tennyson and Charles Dodgson (Lewis Carroll).


It also showed how his other siblings perceived him. His royal brothers, Crown Prince Edward, Princes Alfred and Arthur, connected with him and treated him normally.

He loved and respected Princess Alice of Hesse and by Rhine. He even became a proud and loving godfather to her children, Prince Friedrich (who was also hemophiliac) and Princess Marie. He was particularly close to his sisters, Princesses Louise and Beatrice.

The only one that seemed distant was his sister Princess Helena of the United Kingdom, who tried to stop him marrying into her husband's family because of the fear of having the hemophilia gene introduced into their German royal line.


The biography book by Charlotte Zeepvat is both an engaging and enjoyable read. You'll feel very emotional at the end and it made the Victorian Royals more real to me.

The only downside is that I could not get ahold of a printed copy. I bought a Kindle version through Amazon.com.

Prince Leopold had a brief but happy marriage to Princess Helena of Waldeck and Pyrmont. They had two children, Princess Alice of Albany and Prince Charles Edward. Unfortunately, while vacationing in France, Prince Leopold took a spill while climbing the stairs and hit his knee. He died of hemorrhage four months before his son was born.

Through his son, Charles Edward (the fourth and last ruling Duke of Saxe-Coburg-Gotha), his legacy continues. He is the great-grandfather of King Carl Gustav XVI of Sweden. Unfortunately, Princess Alice inherited his hemophiliac gene and passed it on to her only son, Rupert who died in 1928.

Prince Leopold might have led a short tragic life but his contributions and presence resonate through time.

Blogger's note: Photos are from Wikipedia