BBC Big Read Top 21: How Many Have You Read? 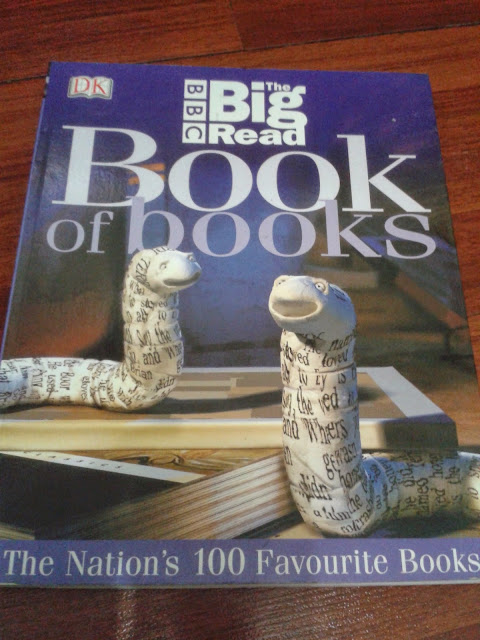 A few years ago, I was in National Bookstore in Ayala when I came across this big book, BBC The Big Read Book of Books – The Nation’s 100 Favourite Books. And to think that my trip to the mall that day wasn't planned at all. Happy coincidences are always welcomed.

I could not contain my excitement that I was browsing through the book even before I could step out of the store ( of course, after paying for it!). It is an interesting read since it contained a general description or synopsis of the different books featured including short bios of the authors, pictures, and trivia about the books listed. This book has become one of my best-loved books as well.

The story behind The Big Read is something that I hope we can emulate here in the Philippines. In 2003 BBC (British Broadcasting Corporation) came up with the Big Read survey which was a poll they conducted to find out what is the British Nation’s best-loved book.

They started asking people and they came up with the Top 200 books. BBC narrowed it to the Top 100 and whittled it down some more until they reached the Top 21.

One of the provisions in being included in the final list was that only 1 book per author can be part of the Top 21. And since the survey was just limited to novels, plays written by William Shakespeare were not included in the list.

By the end of the final survey, three-quarters of a million votes were received and the winner of the Nation’s best-loved novel of all time was none other than John Ronald Reuel (J.R.R.) Tolkien’s Lord of the Rings.

Here’s the final list of the Top 21 books listed according to the votes that they received.

Some of the observations that I came up with, based on the list:

This is not a list of the best or top books of all-time. The survey conducted by BBC is based on people's votes and their preferences. This was made a decade ago and maybe if we conduct another survey, the list of books might not be the same.

If the poll is again conducted in the 2010s, the list would look quite different. I'm assuming that we'll see one of George R.R. Martin's in it.

There have been a lot of lists circulating around the internet based on the BBC's Big Read survey. For me, it doesn't matter what books are on it or not, the important thing is that folks are influenced to start reading.

Your reading choices might not be considered scholarly or sophisticated by others, but it shouldn't deter you from picking up a book and enjoying the feeling of being lost among its pages.

Are you interested in reading any of the books listed?