At Home with Regine Velasquez | At Home in Cebu

Posted by Margaux Camaya, The Visual Traveler July 30, 2016
Asia's Songbird, Regine Velasquez, soars again as she holds a mini-concert today (July 30, 2016) at SM City Cebu. She will be joined by Christian Bautista.

The performances will be directed by Ramon Mitra. And this special event is sponsored by PLDT Home. It will also serve as a kick-off for the Sing like Regine Visayan Tour.

The concert will start at 3pm at the Northwing Lobby Atrium of SM Cebu.

Fans of Ms. Velasquez will be treated to her top hit songs. 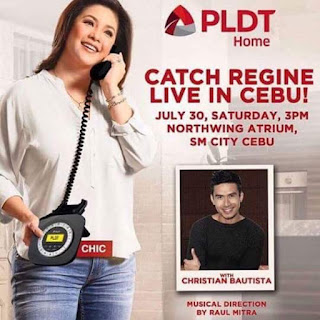