Posted by Margaux Camaya, The Visual Traveler July 12, 2016
Do you have what it takes to be the next Regine Velasquez-Alcasid?

Can you hit the high notes just like Asia's Songbird?


Then this is the opportunity of a lifetime for you. Join the PLDT HOME Regine Series at SM City Cebu Northwing Atrium on July 30, 2016, 3PM. 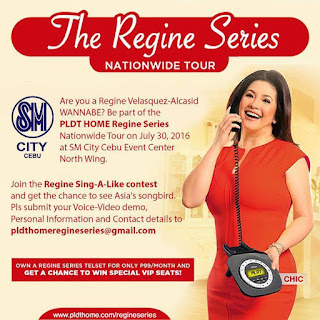 OPM icon and PLDT HOME ambassador, Regine Velasquez will be kicking off the launch of the Southern leg of the PLDT HOME Regine Series Nationwide Tour in Cebu.


Be treated to a world-class musical performance as Regine sings her well-loved hits. Get to meet her in person as she graces the Queen City of the South with her presence.

Join the Regine Sing-a-like contest and get the chance to see Asia's Songbird in person. Submit your voice-video demo, personal information and contact details to pldthomeregineseries@gmail.com.

The Regine Telset Series—a set of limited edition landline phones available for only P99 per month—launched last year to great acclaim, is still available. Get them now as stocks are running out fast. You'll also get a chance to win special VIP seats during Regine's musical extravaganza on July 30.

“The Regine Telsets, when bundled with PLDT HOME DSL, form the foundation of a digitally connected and smart home. PLDT HOME has been making it big in the hearts of Cebuano families, and we look forward to helping them forge the strongest connections with their families through powerful connections and world-class music.” As shared by PLDT VP and Home Marketing Director Gary Dujali.

The Regine Concert Series is also scheduled for a Davao stopover on August 6.

For more information on the Regine Telset Series, visit pldthome.com/landline.